For this year’s winter weekend, the club ventured up to Newtonmore for a stay at the Newtonmore hostel. On Friday evening discussions lead teams to choose routes that considered all the possible hazards associated with Scottish winter climbing. On Saturday morning, one team (John M, Andrew M, Antoine M, Steve M and Gary T) went to try Creagan Cha-No hoping for consolidated snow, while a second team (Dave C, Dave M and Nick O)  went out to Lurcher’s crag, hoping for some ice. 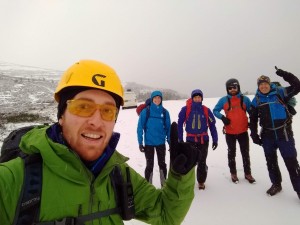 The Cha-No team started from the Coire na Ciste car park and eventually found the crag buried with new snow and well-corniced. They decided to abseil down off a block at the top of Jenga Buttress just north of the recommended gully abseil.

Abseiling down a Cha-No buttress 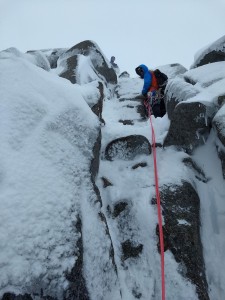 Antoine on the last pitch of Jenga buttress 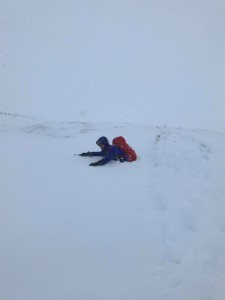 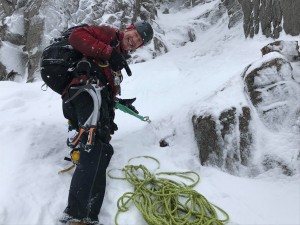 On the last day, one team (Dave C/Dave M) stayed an extra day to head out to Sneachda while John, Andrew, Antoine and Gary headed for a walk towards Carn Dearg. There was some beautiful sunshine followed by sideways wind and sleet, and a (not so nice) stopover at a sheep’s bothy to quickly change gloves. Despite not making it up the munro, there were some beautiful, snowy views. 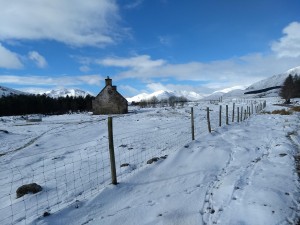 Walking out towards Carn Dearg

All in all, another great winter weekend in the books.