Finally, the very last day of true winter offered good enough ground conditions for some skiing in the famous York area. Unfortunalty, Carr's lane was in too salty conditions. The frenchies thus decided to go for the Millenium Bridge, for an attempt of the first linking of both North and South face. 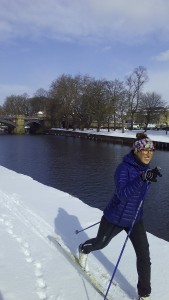 The team composed of Antoine & Lucile decided to approach via the Terry Ave. The idea was to check the snow condition in details. Once the bridge reached, it was decided that the strongest member would go for a solo ski ascent, while the other would climb via the stairs to support in case of emergency, and provide media for the sponsors.

Reports say that Clifford Tower might be in good ice condition for a first winter ascent as well tonight. Fullmoon should provide a providential opportunity.