A Chance of Cloud-Free Summits

The MWIS forecast for Lakes for 11 February 2018 was marginal at best, with words like “frequently appalling” cropping up. Nevertheless, a French-American team of Antoine Marnat, Lucile Boust and Andrew Mirelman piled into the van and left York at 7am. While scanning the BBC radio waves for the elusive news of the French olympic biathlon team, there was a wall of weather on the drive across the Dales that put a damper on any hope for a climb. However, when we arrived at Glenridding, the weather looked more spotty with some clearings and rays of sunshine. We set off up the path towards Helvellyn. 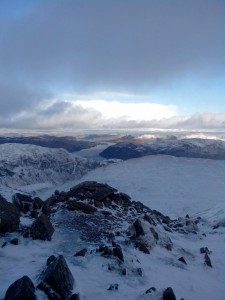 caption: Walking up out of Glenridding

Walking up and over Birkhouse Moor provided some nice views back to the lake, and we held out hope for a good walk along Striding Edge, but when reaching the hole-in-the-wall, we decided to ditch the sidewards sleet and head for cover down to Red Tarn. The summit of Helvellyn was clouded, but the weather down by the tarn was much better than expected. Several teams were seen heading up the gullies, and we decided that gully #2 would go after a bread and cheese break (This being a majority French team after all). 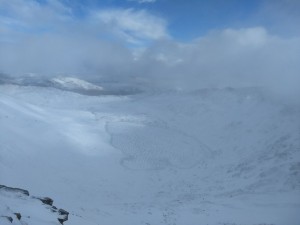 caption: view from Helvellyn down to Red Tarn

The line up had some nice snow and only needed minimal protection. The roped up York mountaineers summited just in time for a cloud free summit, and some nice views of the ridges and happy feelings all around. 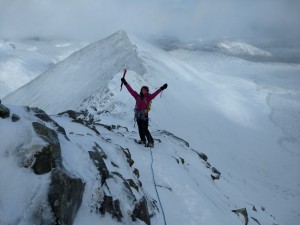 caption: Lucile after a successful climb

On the way down, the weather was holding, so Andrew and Antoine decided to go for gully #1 as well. There was a lot of deep, soft snow at the bottom and the ice midway up held well. Antoine led the way and just before the top out, we traversed to gully #2 for a quick descent with ice axes and crampons.

Some more good weather and sunset colours capped off what was a surprisingly good winter Sunday in the Lakes. Of course the pièce de résistance was a pint at the Rambler’s Inn down by the car.