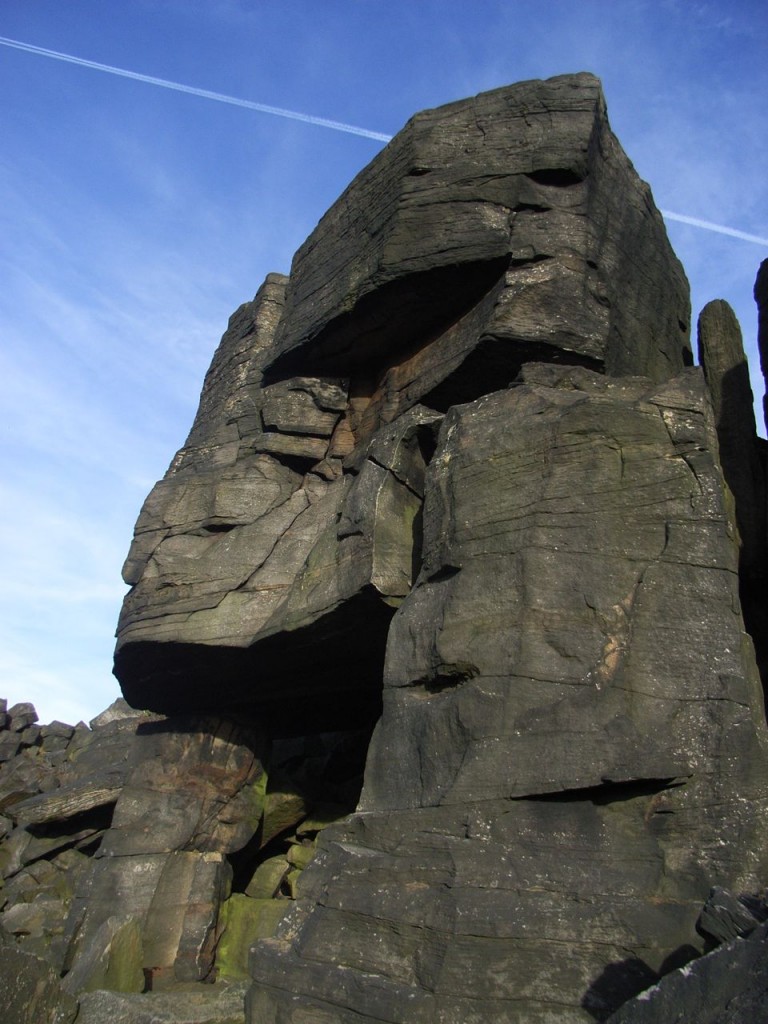 Is that a relative of Heathcliff ?

Well there are some similarities, for sure.
Pennine moorland, a swarthy appearance, an unapproachable nature. and an element of deception. However Wharncliffe is the younger of the two - having been climbed on since 1885 (whereas Wuthering Heights had been published in 1847 ). I've known the name for 20 years, but can never remember anyone saying they'd climbed there.

So....... elderly and unfashionable. Thus, Loch and myself have paid a couple of visits to rediscover the place.

We have found some excellent climbing, albeit with some few issues on the other side of the scales. So here's the low-down for any other seekers of variety, and well over 200 routes which you haven't seen before !

GETTING THERE
Driving from York (Heworth) , it's a speedy trip down the M1, and Wharncliffe is located a few miles SW of Barnsley, off the A616. It takes an hour and 10 minutes to reach Station Road, Deepcar, and park near the WMC. (59 miles). That's not too much longer than driving to Scugdale (indeed, a Copmanthorpe resident would only need 55 minutes). BUT it then takes another 30 minutes to walk up to the crag, (let alone locate the climb........... read on ).

THE APPROACH
The base of the crag at Wharncliffe consists of a deep boulder field. This is very difficult to negotiate, and clambering through it is a very slow job, with great care needed over some deep holes between boulders. (For this reason, Wharncliffe is totally UNsuitable as an experience for novices, groups of kids, or to take your pet dog). 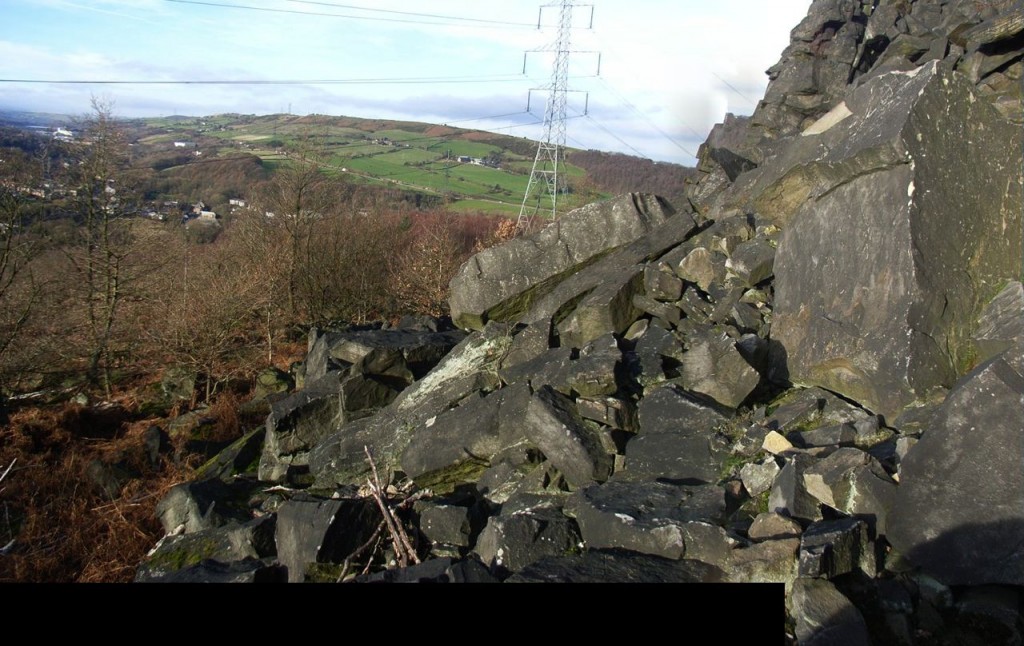 These boulders are possibly the nastiest piece of work I've ever come across, in 50 years, upon either crag or mountain. 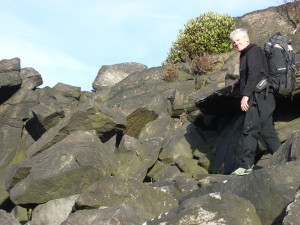 The boulders are graded K8.
(K-grades, by the way, were invented last week (by me) and similarly to the P-grades in the Gritstone Guide, they reflect the likelihood of breaking your anKle. The approach to Pinnacle Ridge in the Lakes is K2, and the Red Cuillin on Syke about K5 ).

We concluded (on our second visit) that it would be better to "tak' the High Road" so from the WMC across the river bridge then follow the path into the woodland and through 2 tunnels under the railway lines.

Go straight across the big woodland trail and up to the pond. It is essential to fork right as you reach the pond. Otherwise you will end up in a wilderness of scrubby woodland thrashing about through deep bracken. ...........( How do we know this ?.......).

The correct right fork brings you out on a good path along the top of the crag.

THE CRAG TOP
So, it's a good path along the Crag top, which is several hundred metres long. Interesting views out across the valley. Few or no distinguishing features along this path, and of course you can't see the crag because you are on top of it !. What is really needed, is a large-scale plan of the crag, to help locate the correct buttress and descent route. In fact, there is a plan (of sorts) in Loch's Rockfax book.

.
Loch cleverly controlled the release of this information, until we had exhausted the full pleasures of walking most of the distance and starting back again.
Anyway,  it is much purer not to have any "Beta" (apparently).
(This rhymes with cheater, and seemingly it is climber-speak for prior information which might be useful. If you have Beta, yours may not be a Valid Ascent. Anyway, we had made a pretty Valid Approach, almost Beta-free IMO).
There are in fact a couple of electricity pylons in the offing, which would provide the best unmistakeable reference points. Obviously the Beta-blockers of Rockfax have not included these upon their plan, but on my next visit, I will.
The Rockfax Guide really comes into its own, though, when you scramble down to the base of the crag and then use the photographs to work out which bit you have ended up at.

AND SO WE GOT TO THE ROCKS The rock is a dark, blackish, sandstone. The crag is generally about 9 to 12 metres high, and it yields lots of good positive holds, including some quite delightful flakes. Mostly its fairly vertical:- we climbed in the Cheese Cut area on our first visit, and secondly found Black Slab, which does lean back very nicely. Movement at the crag foot remains tortuous, because of the boulders, and this includes getting back to your stuff via the descent routes. The crag faces a little south of west, and so gets afternoon sun quite nicely.

MAKING THE GRADE
Wharncliffe has an old reputation ("a crag where the Diffs deserve E-points"... according to my Stanage Guide) for erroneous gradings (and downright sand-bagging).

Hence we approached our first routes with a little circumspection. However there is an extremely useful on-line guide at http://offwidth.uptosummit.com/wharncliffe.html which sets out comprehensively to put matters right on all routes up to VS. Just what's needed, well done chaps.

So we're getting it sorted. All we really need now, is a decent crag base. Perhaps the guys at Rottal Estate could be persuaded to play with their bulldozers at Wharncliffe rather than chewing up the Angus hills. (see http://www.yorkmc.org.uk/ben-vorlich-and-stuc-a-chroin/ ). No ? Thought not.

Altogether, then, we found interest in something new. Loch declared himself "totally smitten" with the climbs at Wharncliffe. Then again, Cathy Earnshaw was totally smitten with Heathcliff.