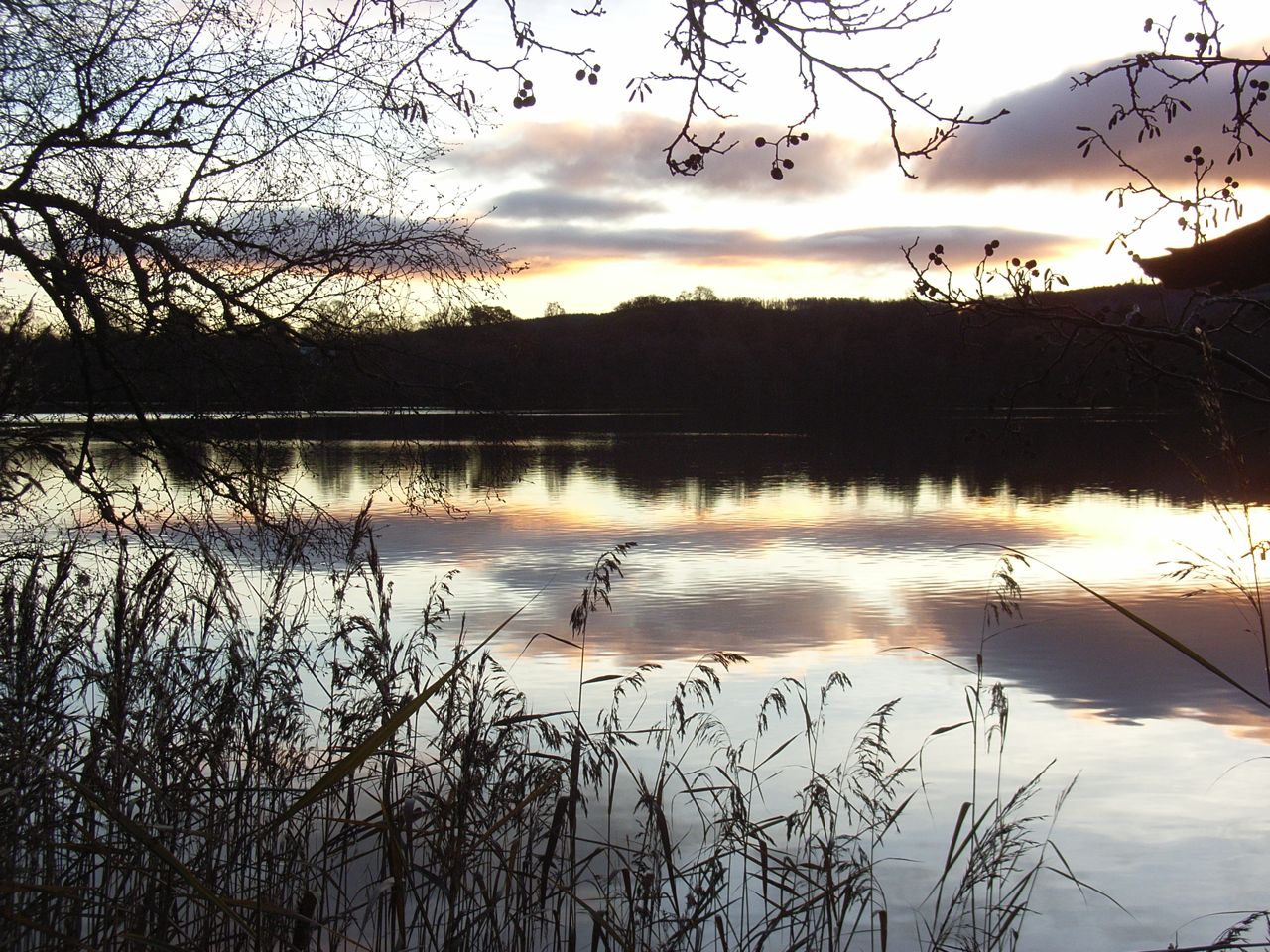 From Glencoe to Loch Earn is 52 miles. It must have been a tough journey 400 years ago, crossing the trackless Rannoch Moor on foot, when there were no roads at all in the highlands (and no effective law, either). But the cateran (armed thieves) from Glencoe made their way across, to take cattle, women, and whatever else. At Ardvorlich House, a gang of them were beaten off in 1620, and an old stone marks the bones of six killed. 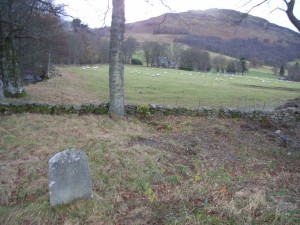 Behind the house, Ben Vorlich and Stuc a'Chroin were our cunning choices on a day of low cloud coming from the north-west, and Brian Harrington and I made a mostly clear circuit. 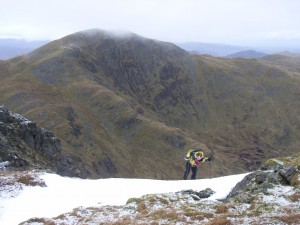 The rocky ridge to Stuc a' Chroin ends in a big buttress. We followed a path to the left, which led us up a steep gulley, just beginning to turn itself into its Grade 1 winter guise, with a sliver of hard snow.
On the edge of the Highlands, we had views south across Stirling and to Edinburgh. 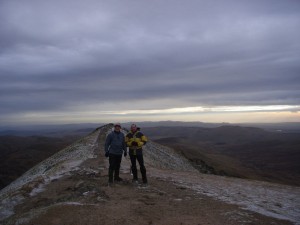 Since the low cloud was forecast to take hold, something east of the A9 was indicated for Sunday. After an excellent night's stay at Jessie Mac's in Birnam by Dunkeld (that's the Birnam Wood which came to Dunsinane in MacBeth) we chose Ben Tirran in Glen Clova. Our idea was mainly to get a clear day: however the hill proved very worthwhile in its own right. There are cliffs above Loch Wharral, which seemed to hold some potential, and superb views to Mount Keen and Lochnagar. 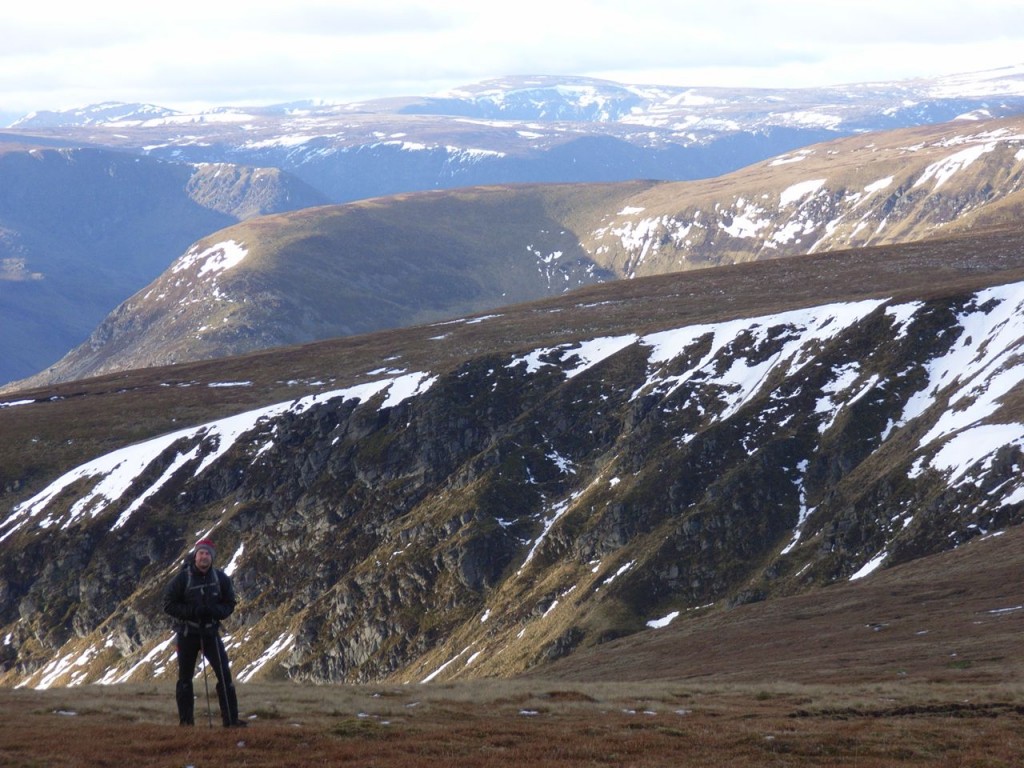 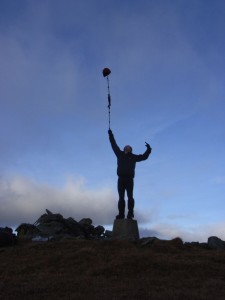 At 896 metres, Ben Tirran is not quite a Munro, but its a better hill than some (such as nearby Mayar). Brian offered his legal services to try to improve the elevation.

For reasons undiscovered, the hill bears an alternative name of "The Goet", thought to mean The Goat.
The one thing that did get our goat, was a couple of new roads which have been bulldozed across the fells. These do nothing for the local environment, and there seems to be a rash of these things in some parts of the Highlands, apparently there is a lophole which means planning permission isn't needed. The website of Rottal Estate tells us that the environment is very important to them....... so perhaps someone else is building these roads ?
It needs controlling. ANDREW 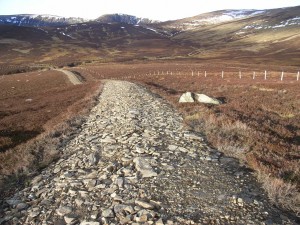 Here is an article from Walkhighlands last year.
"Mountaineers have condemned the Scottish Government as ‘feeble’ for its failure to stop new hill tracks being bulldozed through unspoilt landscapes. The Mountaineering Council of Scotland has been campaigning for all new tracks to require planning permission. This would prevent land owners from claiming that tracks are for agricultural use when they are really just for use by shooting parties or for other recreational purposes.

However planning minister Derek Mackay has announced that he is allowing a free-for-all to continue and will do nothing to prevent the construction of ever-more huge, unsightly and damaging hill tracks through previously unspoiled mountain landscapes.
David Gibson, MCofS Chief Officer, said: “We’re just days away from the 2013 Year of Natural Scotland and the Scottish Government has once again proved feeble in the protection of our countryside.
“We have a crazy situation where some tracks need permission and others don’t. This is easily abused by landowners who claim a track is agricultural when its only purpose is to get 4x4s to places which most people could walk to. Even worse, the tracks are often badly built, ugly and do real damage to plant and wildlife.
“Derek Mackay could have solved the problem easily and fairly by saying that all tracks need planning permission. But he has let Scotland down in exactly the same way that his government has over its failure to stop wind farms being built in unsuitable places.”
During the recent public consultation the MCofS was among a number of organisations which presented extensive evidence to the government that the planning system is being widely abused.