The Be-Knights of Glencoe: A Scottish Winter’s Tale

For a long weekend when the UK was gripped by “Beast from the East” fever, a few of us headed North by North West to make the most of the icy conditions in Scotland.  The Beast had gripped the Country, but not the bit of North West Scotland where we all gathered in our comfortable Airbnb cottage (Birch Cottage, Ballachullish), with it’s amazing views.

There was a leisurely start after the late arrival on Thursday evening/early hours of Friday and John, Will and James headed to Beinn Udlaidh, and its north facing cliffs just above Glen Orchy.  After the short steep walk in through the woods the cliff really wasn’t visible but the aspect did shelter us from the worst of the wind.  A recce along the base and we attempted a steep ice flow on the North Western flank but the weak ice made us back off.  Moving further in brought us to a 4-metre ice column, beautifully formed it seemed to lead to another tier above which stepped, steep walls of ice led to the top.  The column could have been bypassed and, looking through the guidebook afterwards it isn’t mentioned, but it was too good to miss.  Frankly we weren’t even sure what we were climbing, until afterwards.  Will made short work of the column and John led off on the second pitch.  It involved some snow scrambling until the steps started and the ice steepened, screw placements were solid although the third stance was a bit tenuous.  A third pitch of more good ice for 10 meters deteriorated into moderate neve with mixed ground, ice, snow and rock finalizing the route.  The late star and time on the recce looking at route options led to a finish in the dark.  But that’s why you have a head torch. Back at the cottage, warming up over a whiskey, we agreed that we had climbed Doctors Direct (iv 4). 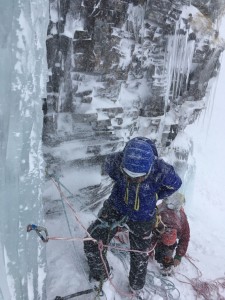 John and James get comfortable at the ice column 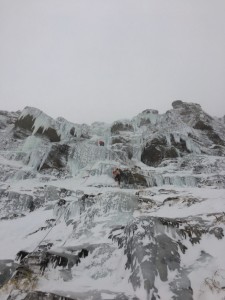 On Saturday, with the South Easterly winds dying down a bit, the conditions looked good for Crowberry Gully (IV 4 ***). On Buachaille Etive Mor.  It isn’t often in such good condition and the reports on social media looked superb.   Plus we, correctly, figured that there would be some shielding from the wind in the gulley.   We parked the cars at the little car park down from Lagangarbh and approached the gully from below a little after midday choosing to start later and accepting the fact we would finish using head torches because we didn’t want to get caught up in the inevitable queue of teams that would try and start earlier; we were correct.   In three teams of two (Will and James/ Antoine and Lucile/ John and Andrew), we went up the first few pitches of beautiful hard snow pack. The crux ice pitches were in fantastic condition, , We relied on Will and John’s experience to get us up with the youth team at the front and the old guy at the back and moving in pitches and at times together we made good time and topped out on the heels of two other teams ahead of us and just in time for benighting (after some discussion had about the meaning of the word, either arriving in the dark or getting stuck in the dark, we use it as the former, we weren’t stuck) 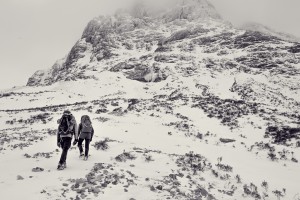 John and Andrew on the approach to Crowberry Gully

From the top, and in the dark we navigated using a combination of compass, pacing, memory and very usefully Andrew’s phone GPs software (OS map offline maps) to the Coire na Tulaich and built bucket belays to get the team down the steep (near vertical!) slope. Will descended last on a beautiful snow bollard. 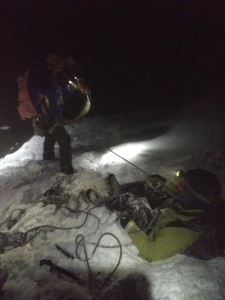 Will McEvoy, lowering his Dad, John, down on a bucket belay to investigate the exit slopes.

After a long day and night on the hill, a well-earned beer and dinner was served with Mont d’Or Cheese from Paris, courtesy of Antoine and Lucile. All at 1am!

After the previous long day(s), and according to the pretty bad weather conditions, it was decided to have a more relaxed day: We headed to Glencoe ski resort. While Will was teaching James how to ski, and John unfortunately had to give up after few turns because of an injured toe; Andrew, Antoine and Lucile skinned up for Munro bagging. Very low visibility and bad snow conditions at first, but our perseverance paid: the last lift was closed, and we were alone to go up a nice slope of fresh snow. The reward was for sure this patroller hut near the top, open and with radiator on! After a warm-up, the Meall a Bhuiridh cairn was ticked with the clink of a ski pole by all three. 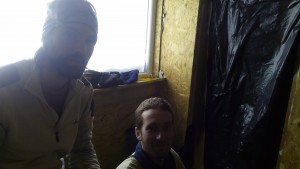 Tea break at the ski-patroller hut.

After Andrew and John dove back to Yorkshire, there was only four of us left. We decided to head for Curved Ridge (II/III ***) on Buachaille Etive Mor, after a massive British breakfast (guess who had 4 bacon, 3 sausages and 2 poached eggs with bread and butter?). Will said we should go European style: pitch only the two cruxes, and tight rope otherwise. The British team was in front and the French team following. Snow conditions did not allow to climb very fast, with a lot of digging involved. At the top of the ridge, when we had to reach the Munro, avalanche risk was way too high, and it was decided to retreat abseiling. Going down the right hand side Easy Gully was indeed not a safe option with fresh snow up to the hips, and probably the way down Coire na Tulaich was unsafe as well. James’ tangly rope offered us many snakes weddings, and few blocked ropes, but we made it to the car park before nightfall.