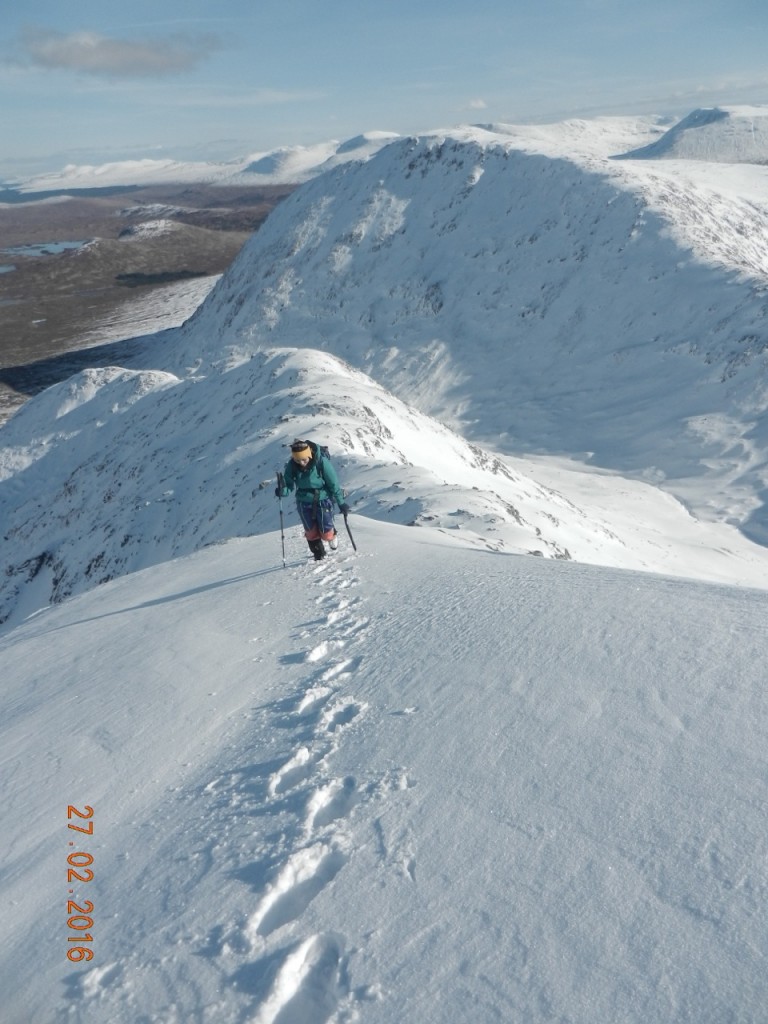 There's over 800 metres of it altogether, sometimes comfortably a few metres wide, but several times narrowing to the same width as my shoulders, with a long slithery drop to either side. 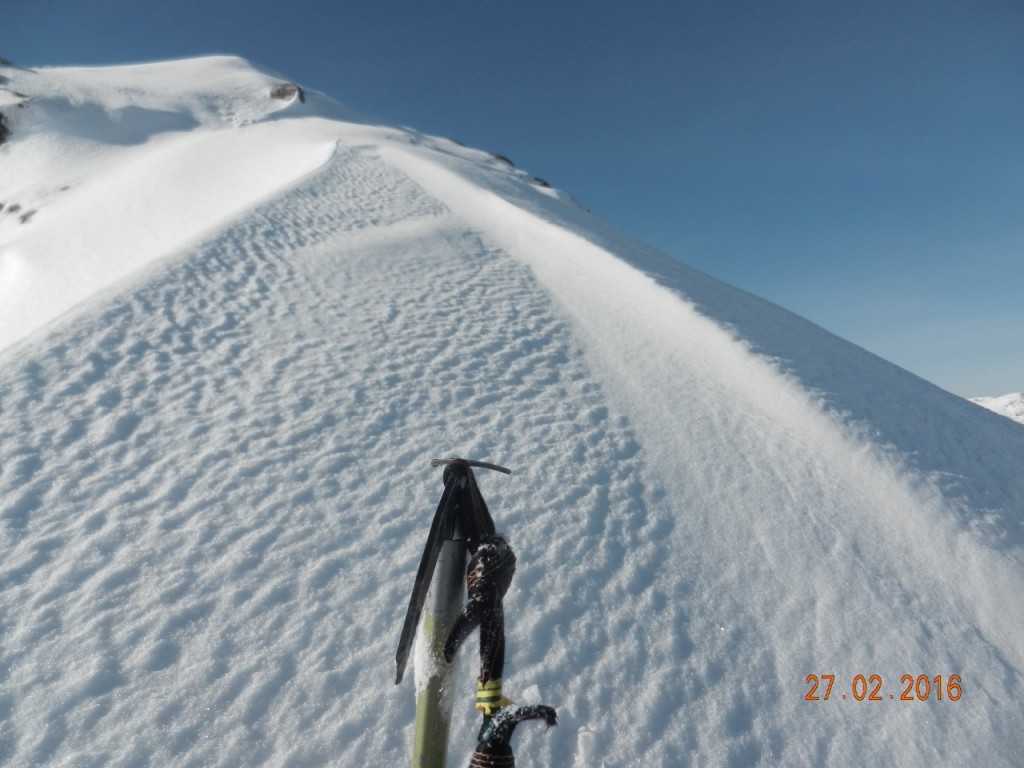 The 800 metres took us 40 minutes..... steady and tiring. But on a day of totally perfect weather, we had plenty of time in hand.

I'd begun by ambling up the good path onto the Munro of Stob a'Choire Odhair, in the Blackmount above Bridge of Orchy. Marjan was getting her well-deserved first views of the Highlands (following the January trip when nothing could be seen). From here, I reasoned, we'd get the best long range views across Rannoch Moor, south to Cruachan, and north to the Ben. 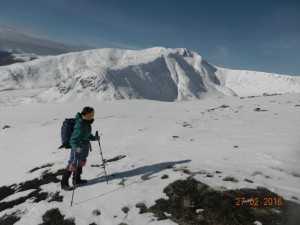 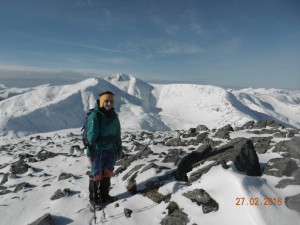 So after elevenses, we went down the west ridge which points directly at Stob Ghabhar, then headed rightwards across a deeply-snowed bealach at 650 metres towards Sron nan Guibhas, (which is the north-east ridge sweeping down from Ghabhar). Gaining the Sron is supposedly up a “line of weakness” between crags and outcrops. The weakness proved to be in ourselves, as crampons balled up and the weight of soft snow on our boot tops dragged us back. We removed the crampons and took to the rocky bits to haul ourselves up through outcrops and gain the ridge. 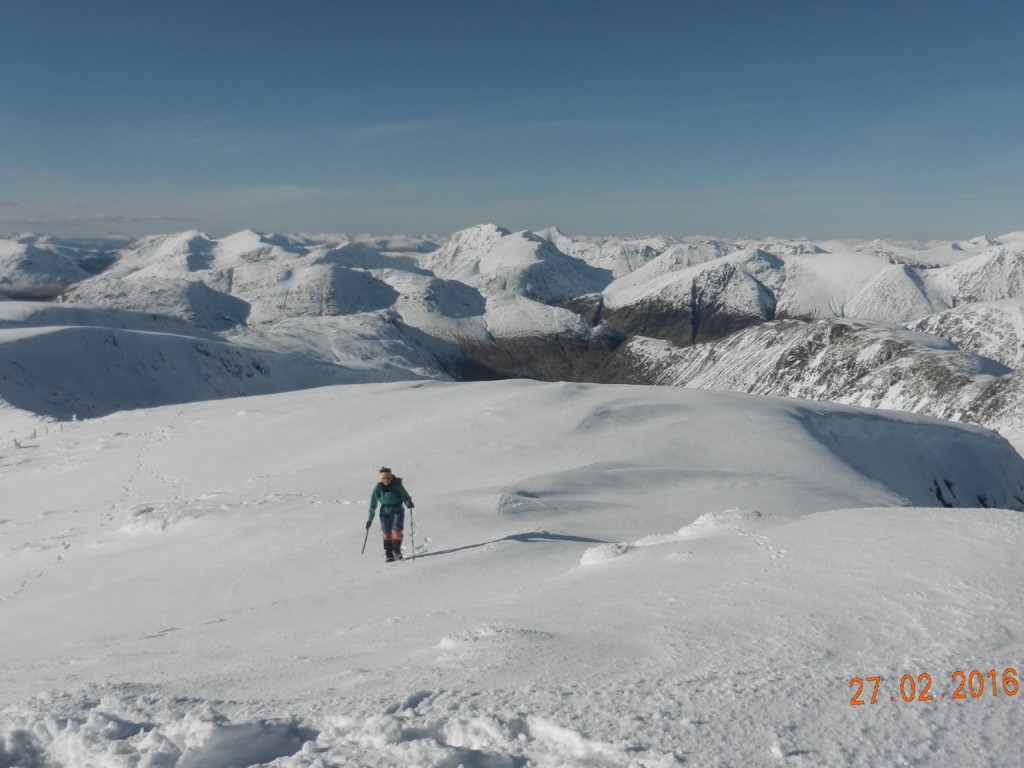 All these exertions meant that Lunch was not served at the usual time, but had to wait until we found level ground and could draw breath above the rim of the impressive Coirein Lochain. This is “back country” and somewhat a 'road less travelled”. We had the mountains almost to ourselves with some of the most perfect weather imaginable; the snow was untouched here, and for almost 2 miles we were the first visitors to a pure white land without any tracks or footprints. 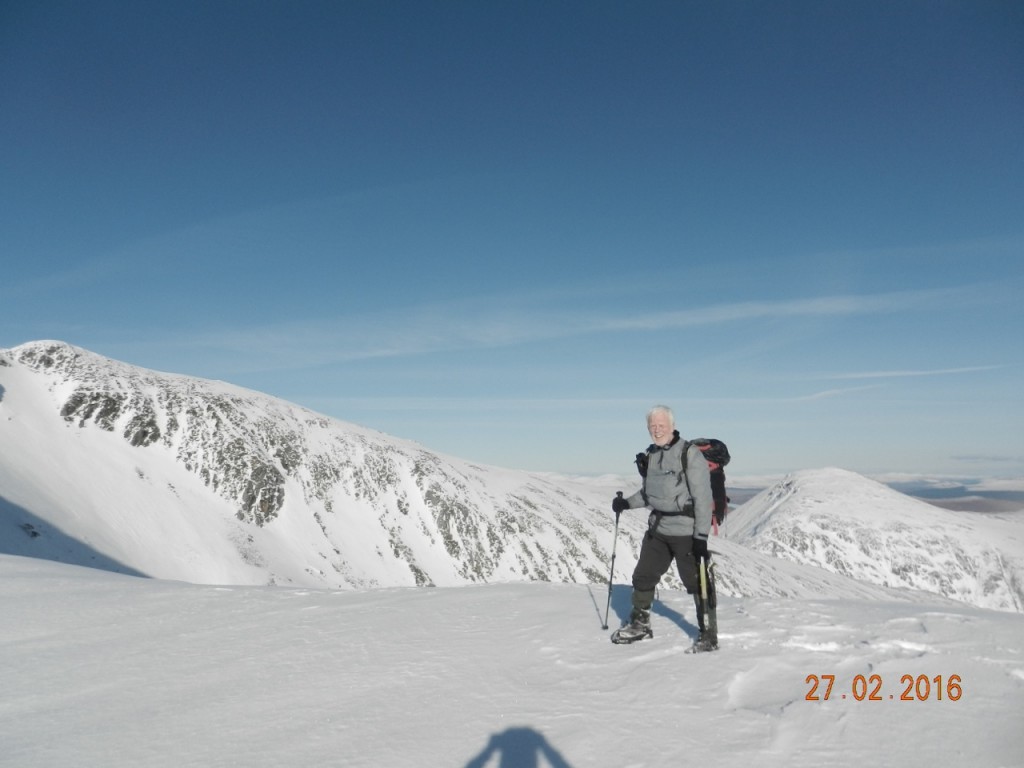 In the sunny afternoon, we made our way over the summit and down again past the well-remembered Clashgour hut and onto the track leading (ultimately) to the bar at Bridge of Orchy. We were both feeling a trifle fatigued..... but it had been 8 hours and 1300 metres in the frequently soft snow.

Anyway a nice meal and a spot of wine promoted recovery; so on a second spectacular day we started from Bridge of Orchy for Beinn Dorain and Beinn an Dothaidh. In complete contrast, these hills were thronged ….. ramblers, Munroists, and ice-climbers made it almost worth opening a tea shop at the Bealach. 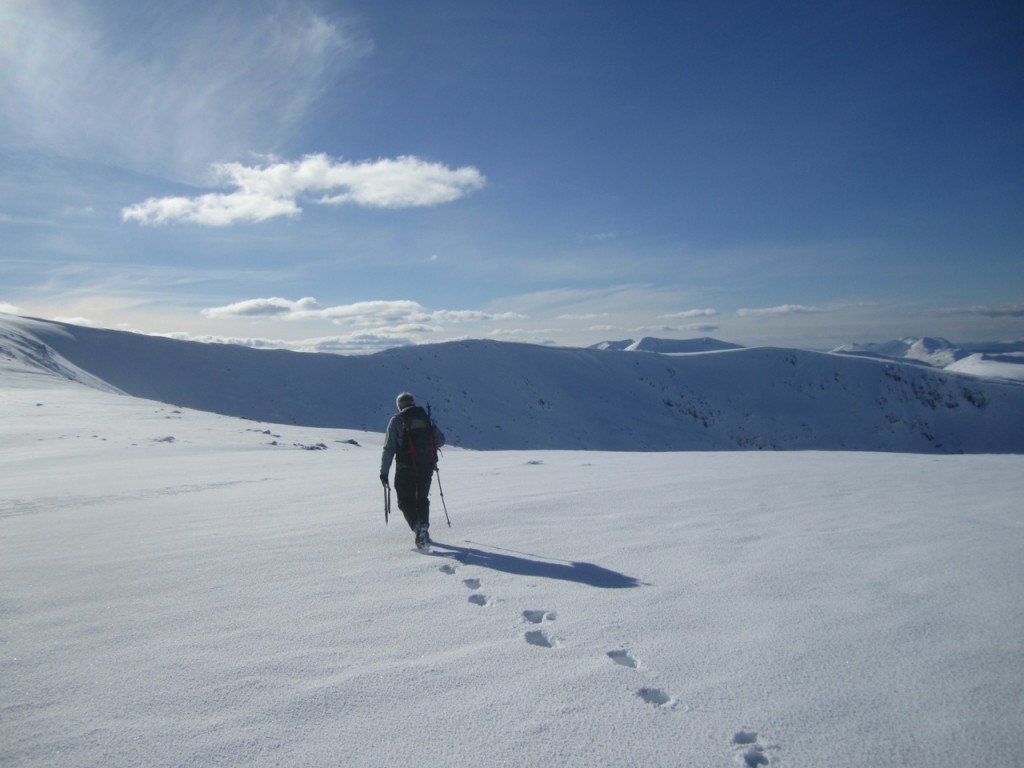 Again the views were totally wonderful; and looking across the pointy top of Cruachan, the snowy peaks out west must have been Mull. Yes, and just visible well south, even Jura !!

By the time we were wandering down from the second Munro, I felt there was nothing more to do (beyond finding a chip shop) as better weather could scarcely be imagined (except for the softness of much of the snow). Already, however, a haziness was appearing in the west and a faint cast was over the sun, the tokens of a change in weather coming in. 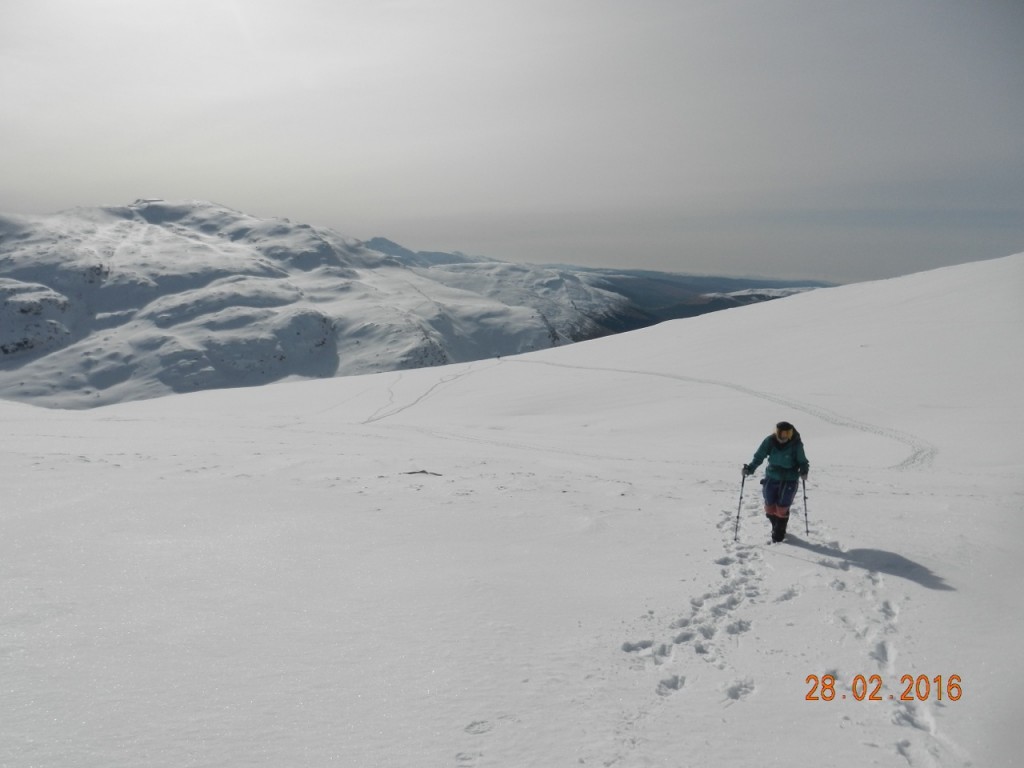 Nothing shall last …..but whilst it is here, how nice it can be.!. 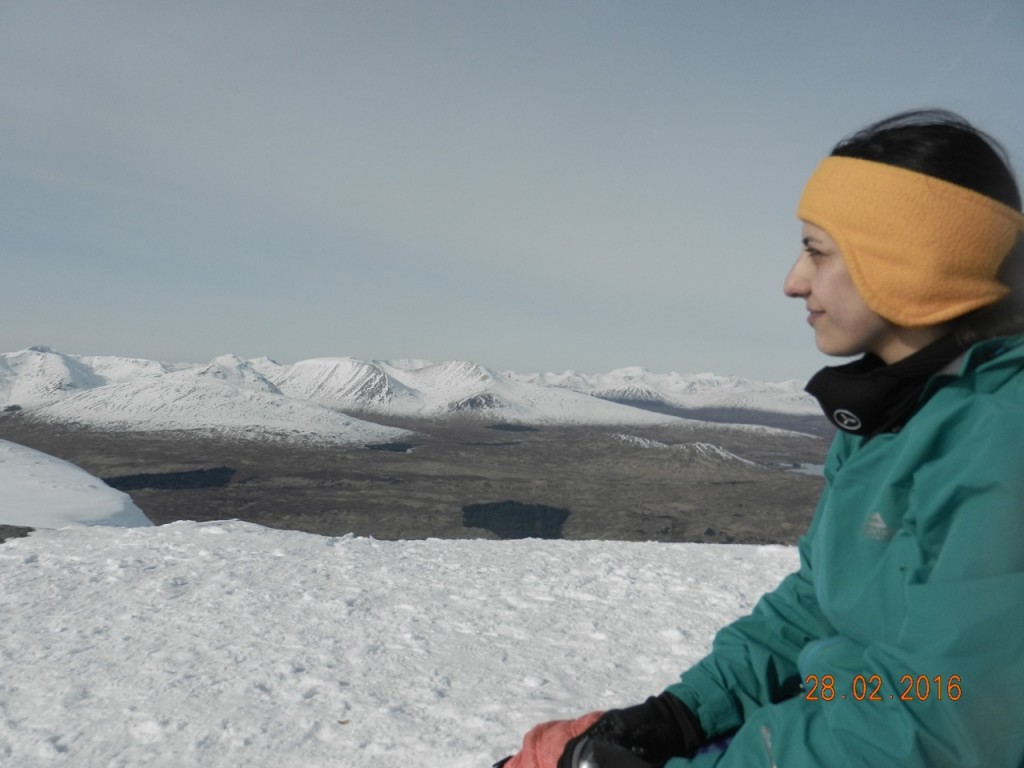