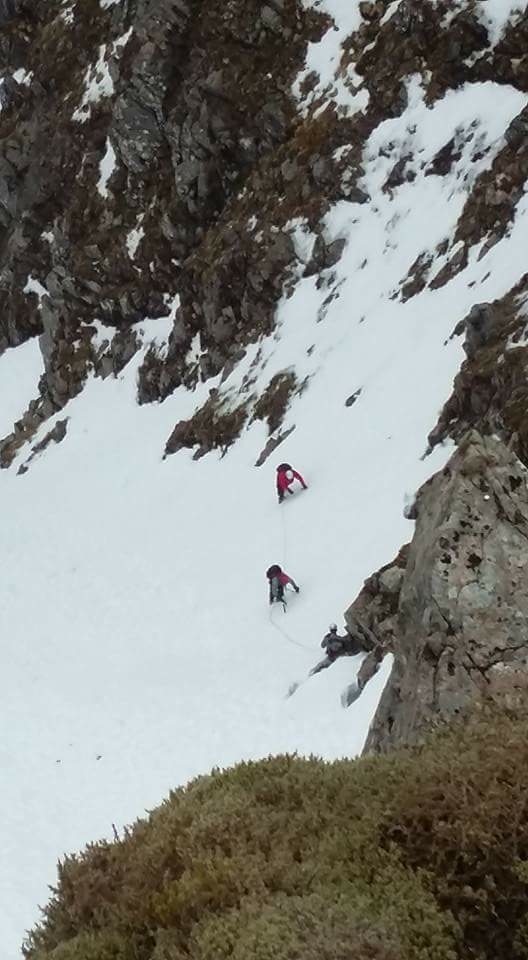 I was ambling along daggering the snow with my axes, and noticed that the rope seemed to have got rather long. “How's rope ?” I called to Paul...... getting “2 metres left” for an answer. A trifle unsatisfactory. 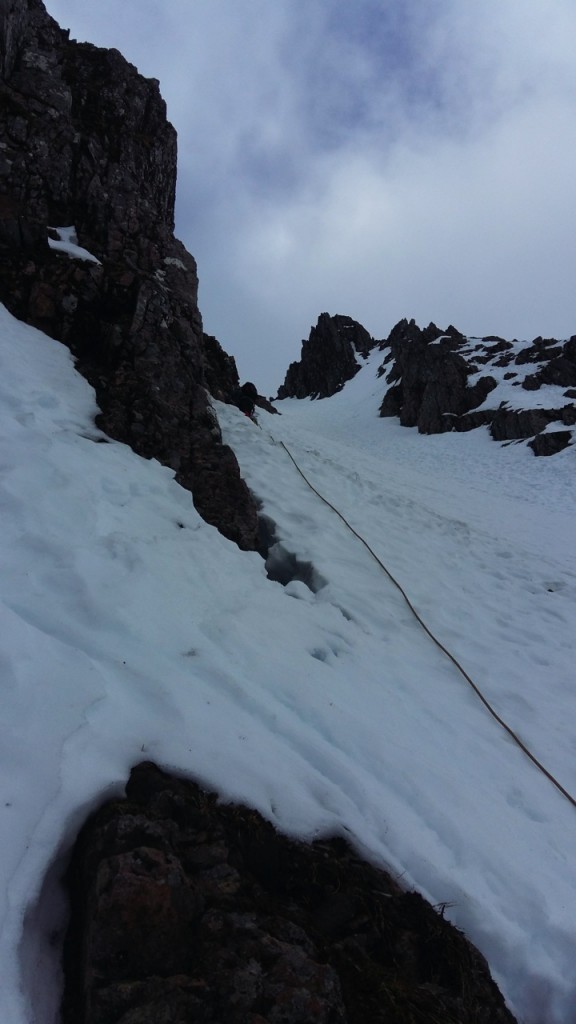 That meant there would be rather more than 40 metres of rope behind me...... or about the amount which could be dangled from a 10 -storey building. It was alleged that I had failed to hear the “half rope” shout.

A long way down within the bottom half of the rope, a couple of friends occupied the only slots in the gulley wall which it had been possible to find. My human friends Paul and Steve Murray gazed upwards as I set about making a buried axe belay. 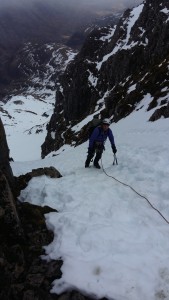 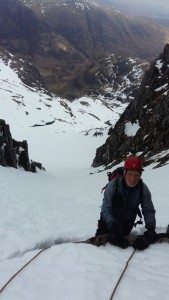 Mike and Maria were busy in the nearby N-C Gulley in Coire nan Lochain. We had decided on the attractively straightforward slope of Broad Gulley for an easy day........ this being, too, just about the only easy to moderate route in the coire I hadn't done. But what Broad Gulley giveth with one hand..... an amenable angle and very good firm snow..... it also taketh away with the other. The gulley walls have a profusion of blind scrapes, almost none of which would accept any gear. Ach, well, less gear being placed meant quicker pitches..............

We shared leads..... which between three of us, meant a certain amount of untying and re-tying to change places as we went along. Actually time was largely on our side on this sunny spring day. The snow remained firm in the shade, and apart from M&M we were aware of only one other team in the entire coire. 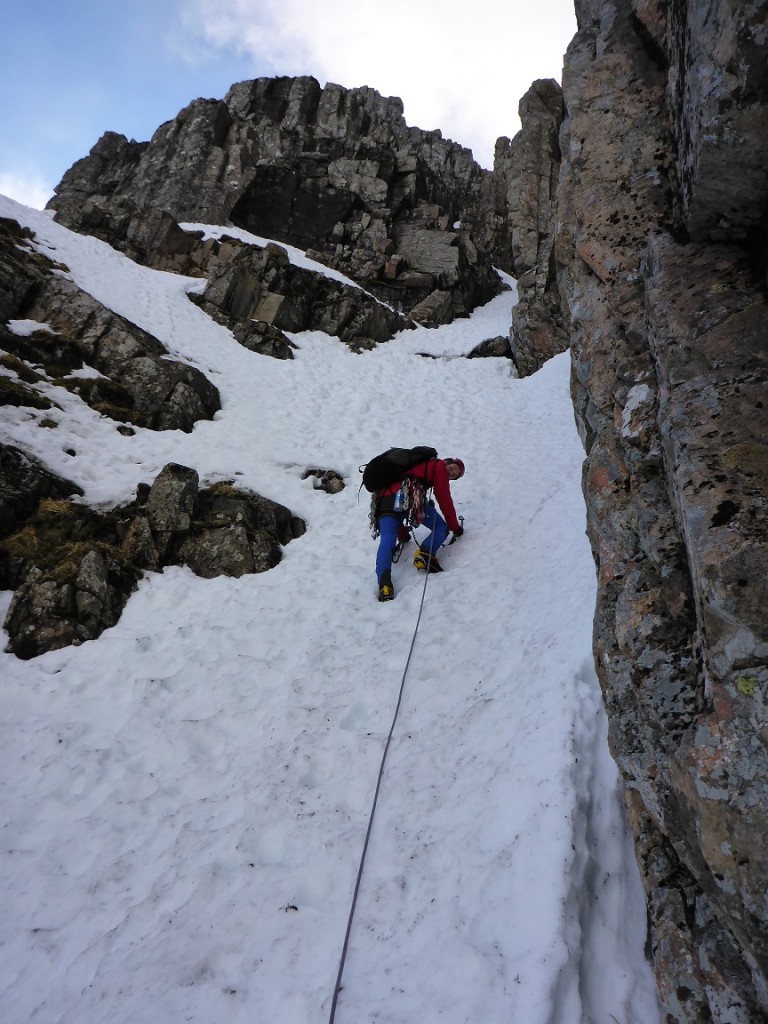 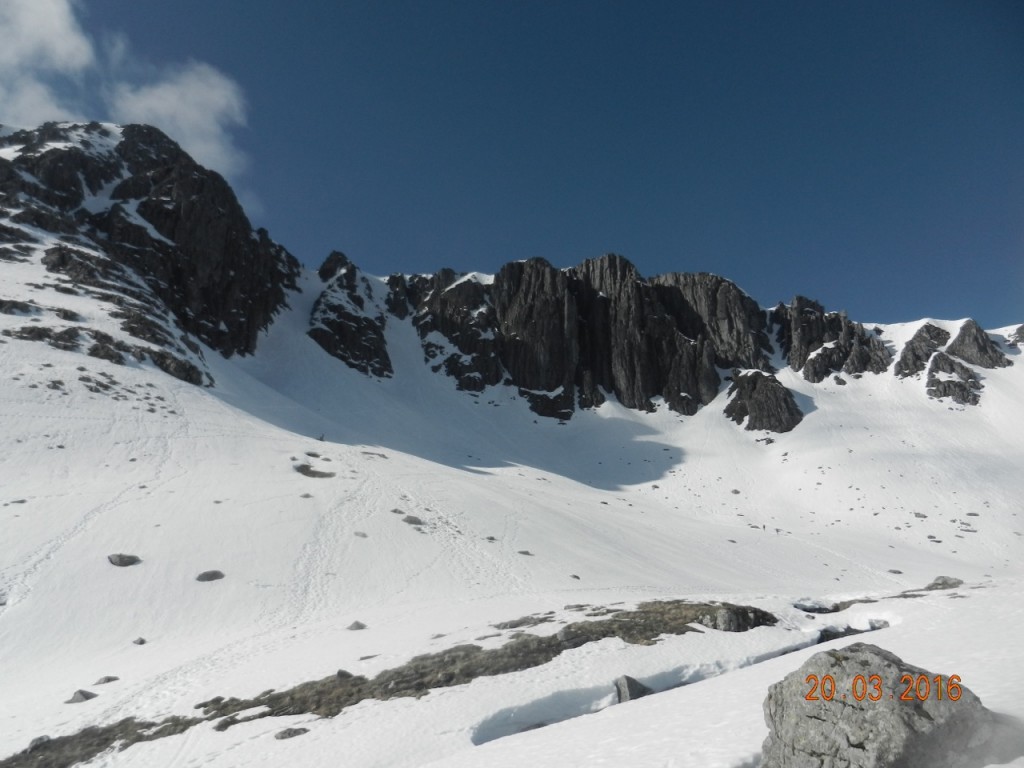 A second well-nigh perfect day, and made all the more tasty after a gloomy forecast. Saturday saw a clear difference between cloud sheets up north and bright sun in the West Highlands, so we'd ended up on Beinn Fionnlaidh, leaving Paul with just 9 Munros to go. My two previous ascents from had been unremarkable walks from Glen Creran in the west. This time we went up from Glen Etive, which gave us a very pleasant snow arete leading up to the summit. 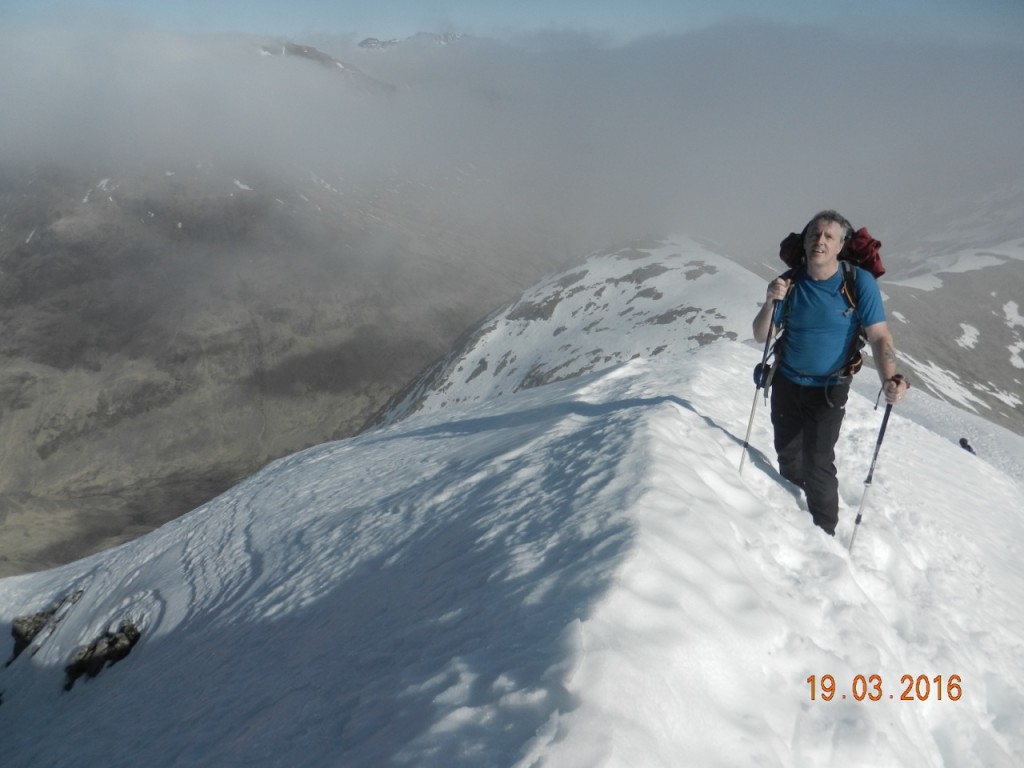 Gentle wraiths of cloud swirled about, hiding and then revealing the surrounding mountains. We lingered for about 40 minutes at the trig point to enjoy the mild sunshine. 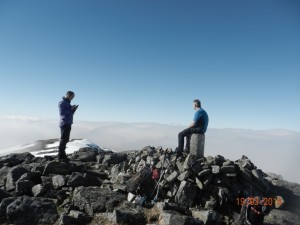 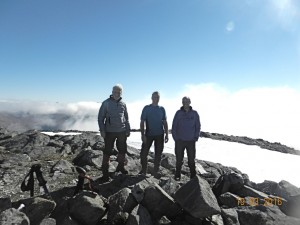 Eventually, the call of the pub could be felt, so it was back down the arete. Here we encountered a couple of Brocken Spectres, and they waved madly to us (as they usually do). I hadn't seen a Spectre for some while.......... it's nice to know they were out and about enjoying the sunshine too. 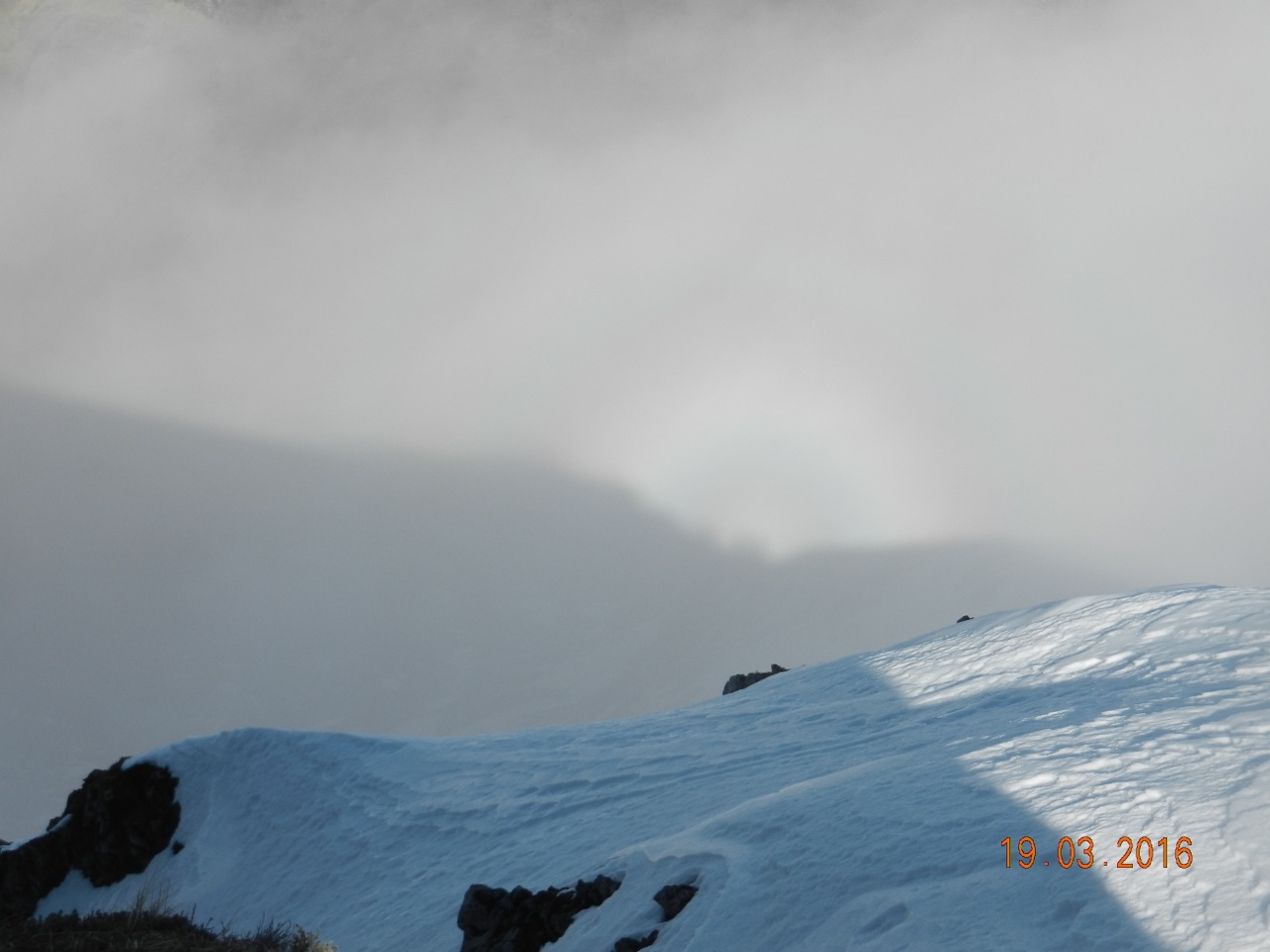 Maria and Mike had enjoyed similar weather on Saturday, walking over An Caisteal and Beinn a'Chroin. They were treated to a cloud inversion on the ascent, which gradually cleared as the day went on to leave wall to wall sunshine. 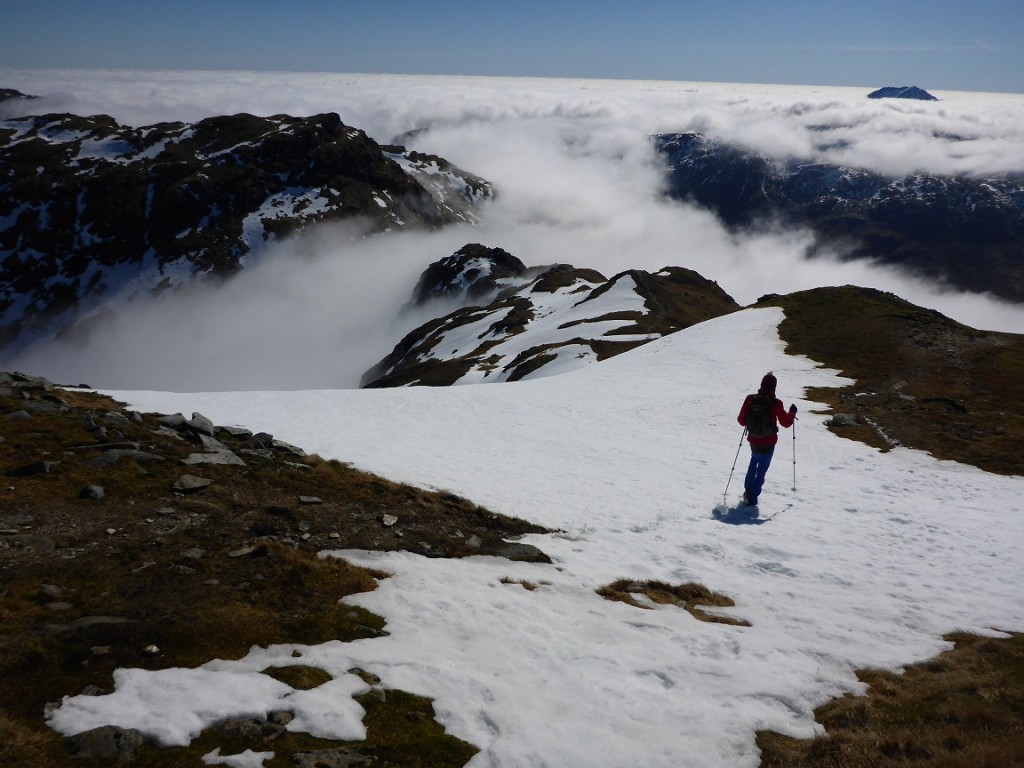 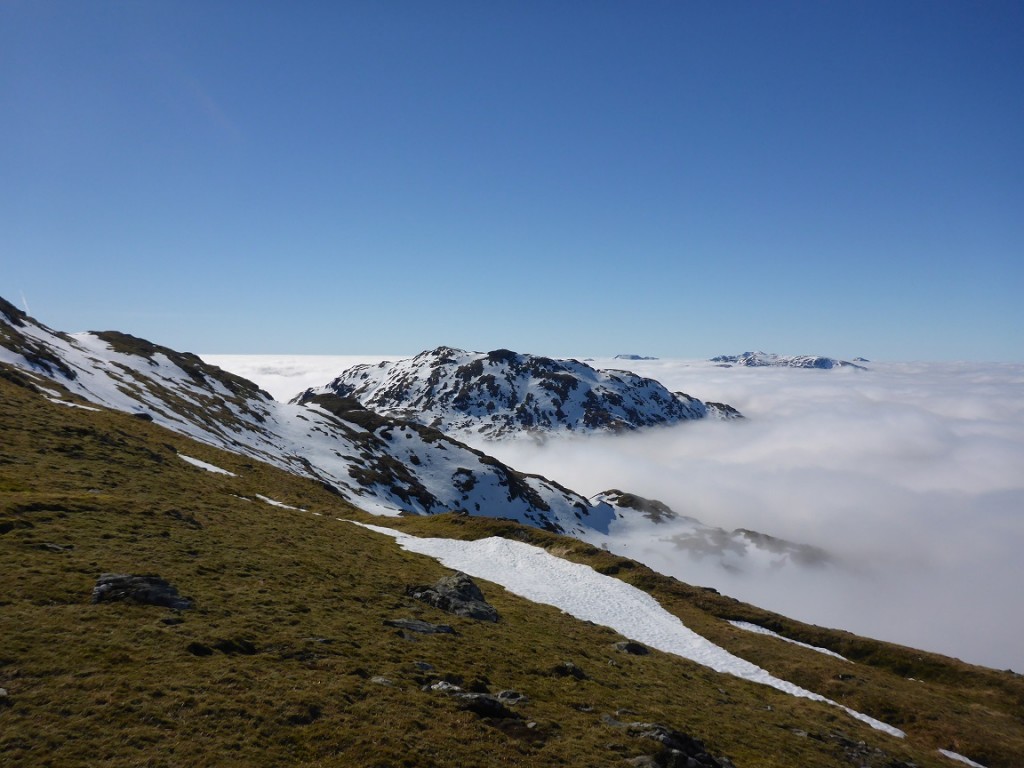 So we all went home with a Broad grin.