Maria and I have had Tower Ridge on the 'to do' list for a long time. Winter climbing on the North face of the Ben is always an amazing experience, and Tower Ridge has quite a reputation - the description in the SMC guide starts by saying it is 'one of the finest winter mountaineering expeditions in the British Isles'. Having now climbed it, I'd definitely agree with this assessment (and the 4 stars it gets in the book). 600m long and graded IV 3, it felt more like an alpine route than a typical British winter climb.

There was a bit of cloud around, with the occasional snow shower, but on the whole the weather and conditions were excellent. There had been a decent frost overnight and it was probably a couple of degrees below zero while we were climbing, so the snow and ice was nice and firm. The wind was also fairly light, which always helps (for those unaccustomed to Scottish winter climbing, it often involves storm force winds, blizzards, and generally lots of type 2 fun). 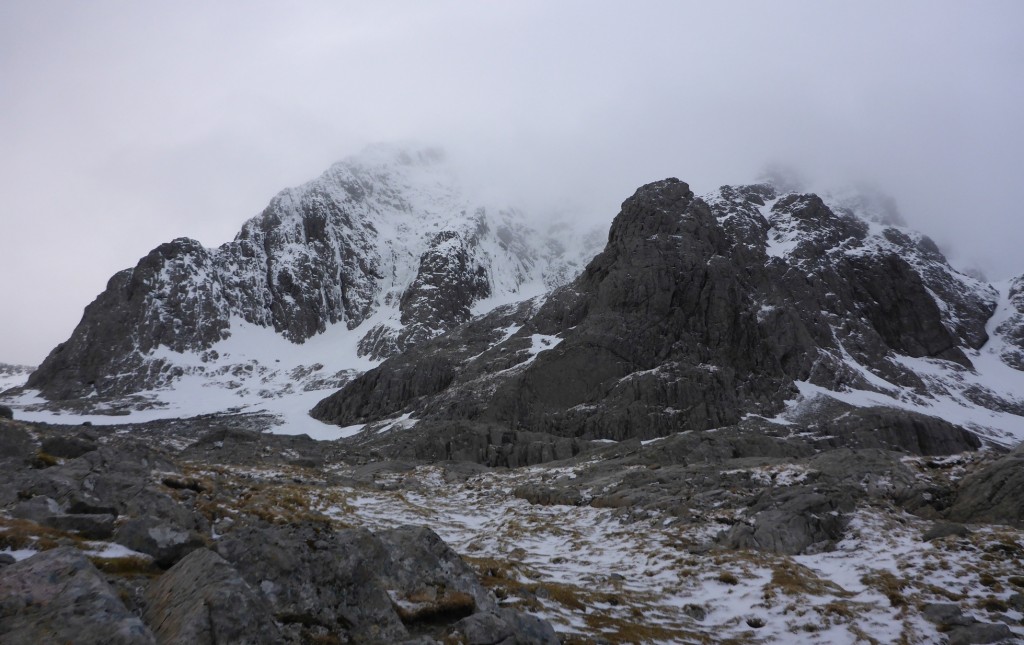 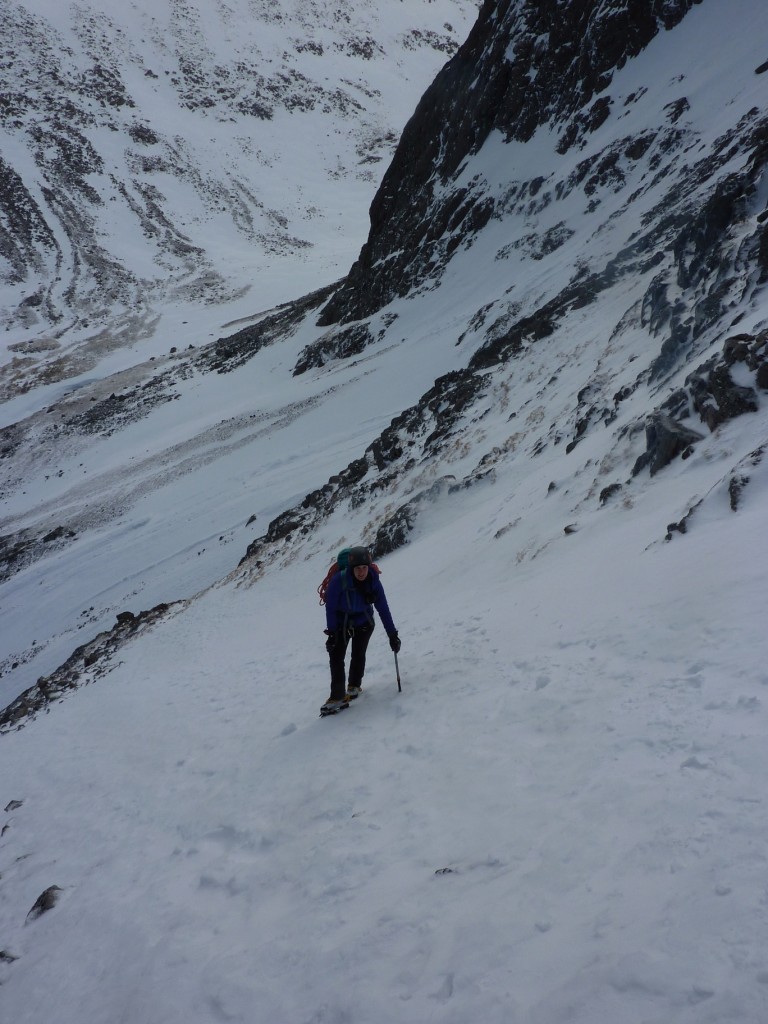 Maria on the approach slopes towards the Douglas Gap Looking up East Gully towards the Douglas Gap, where the proper climbing begins 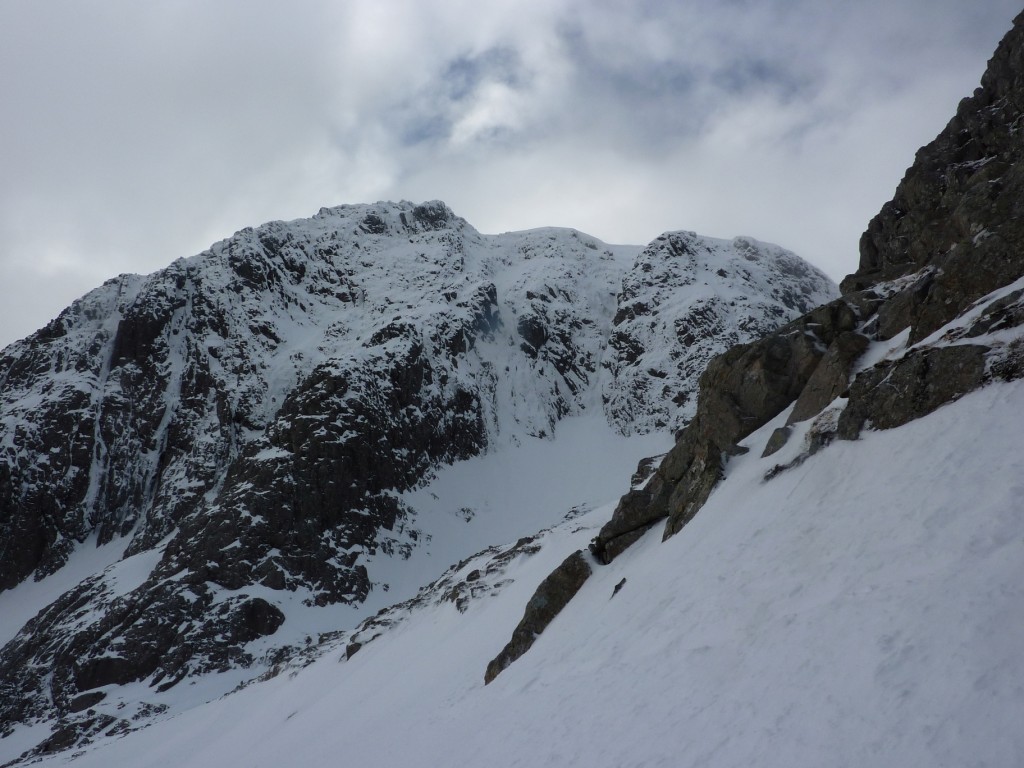 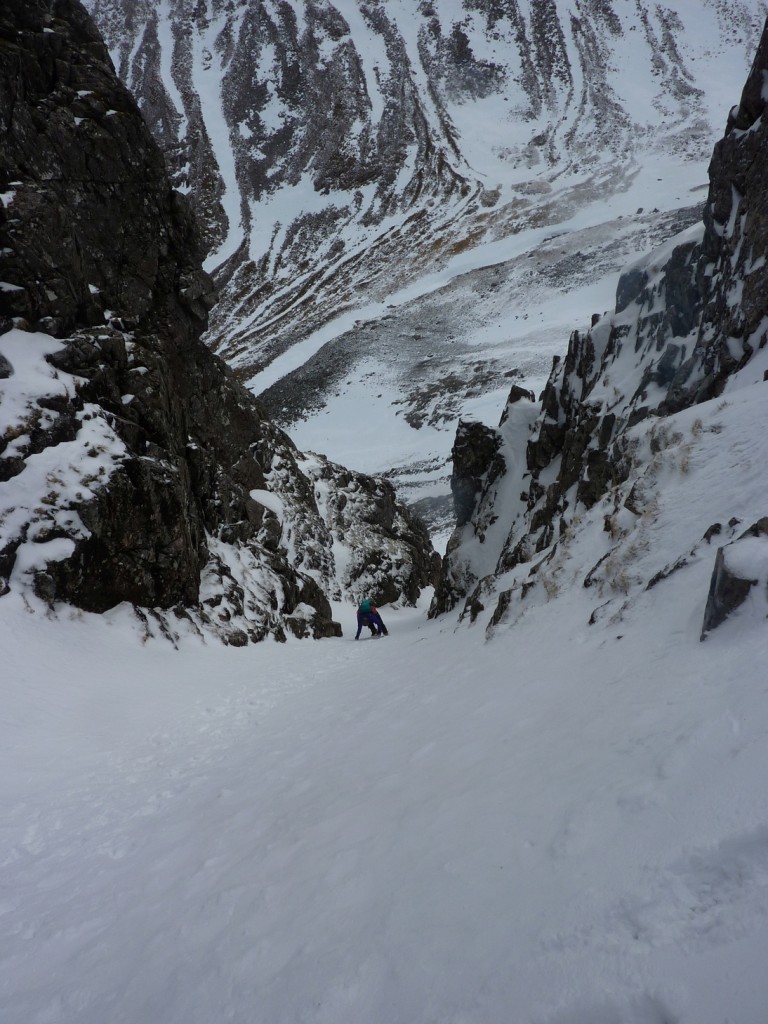 Maria on the way up East Gully 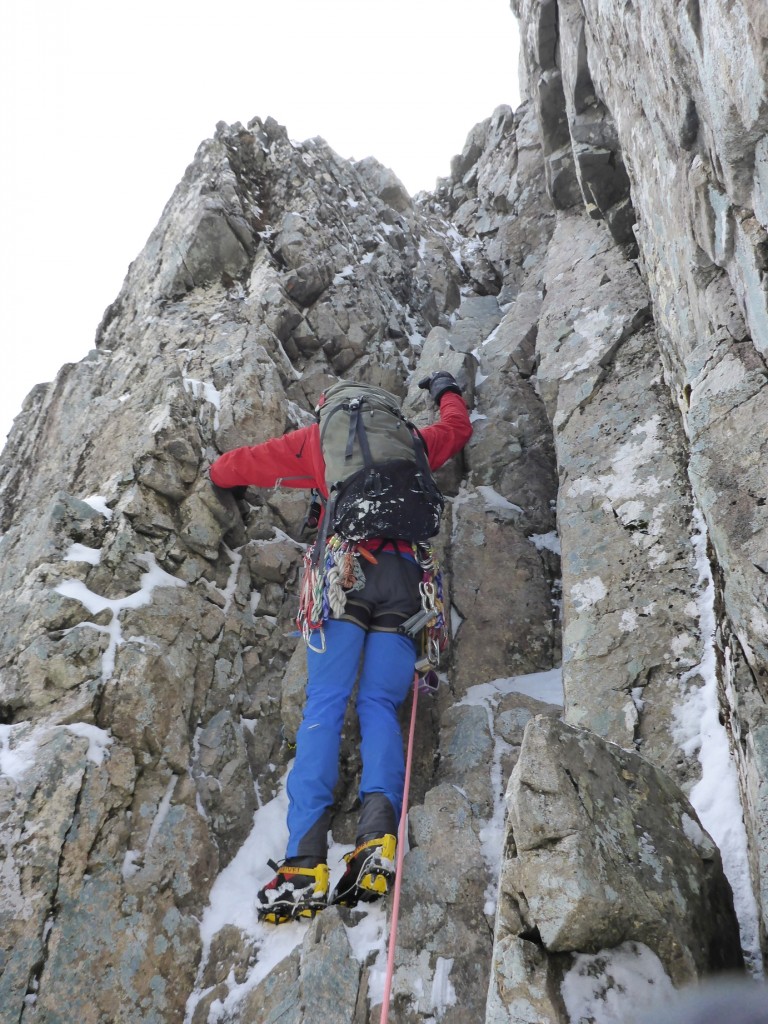 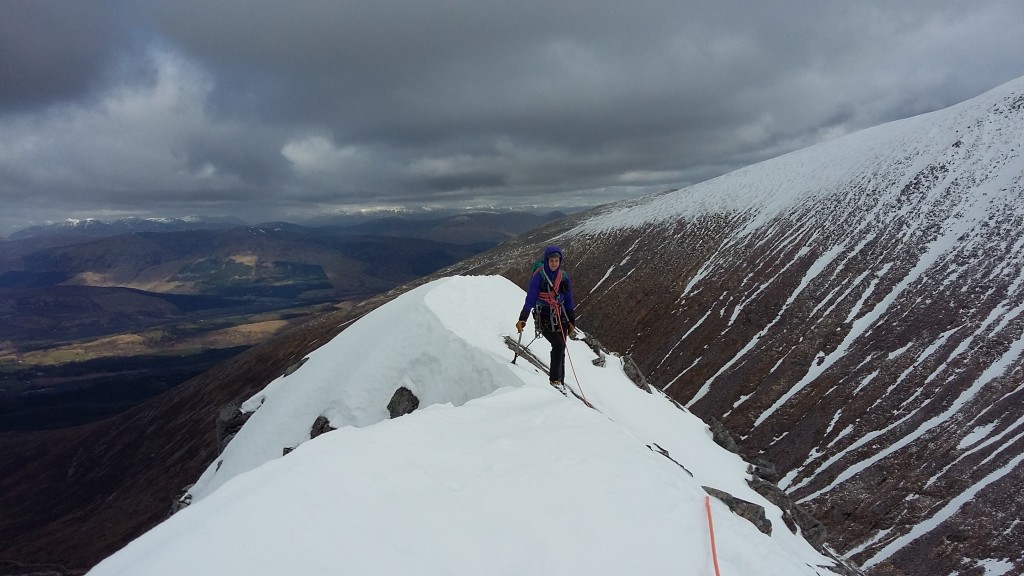 Moving together on the nice snowy ridge above the Douglas Gap 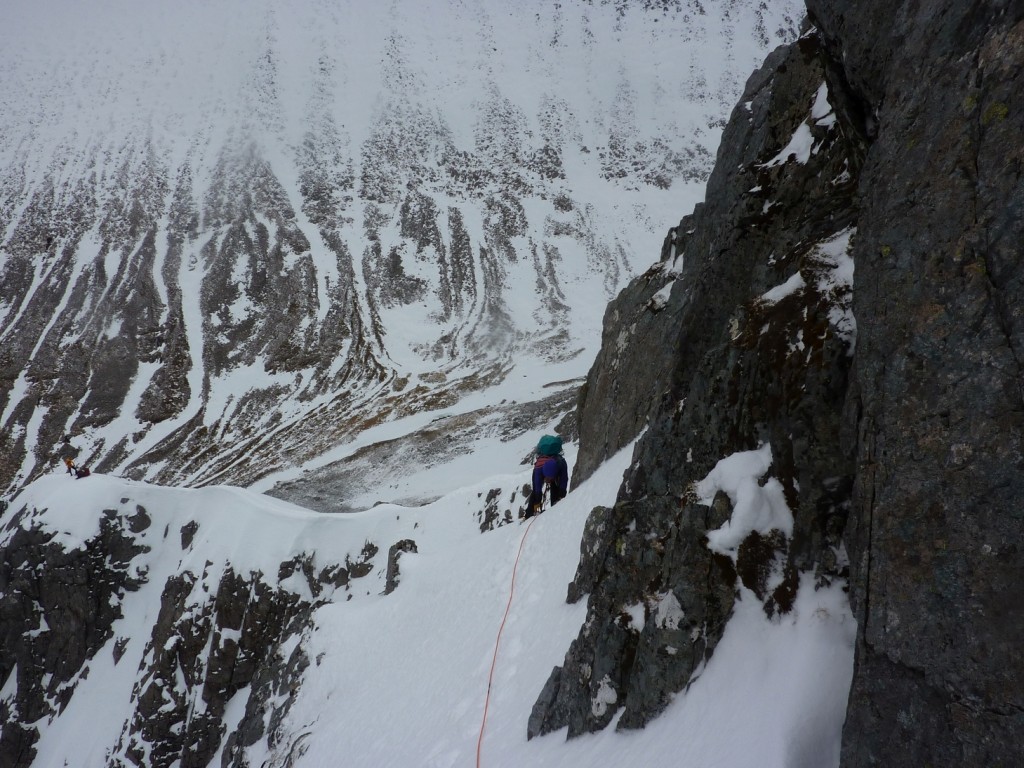 The route then traverses right on an exposed snowy ledge, before turning more steeply up left to regain the crest of the ridge 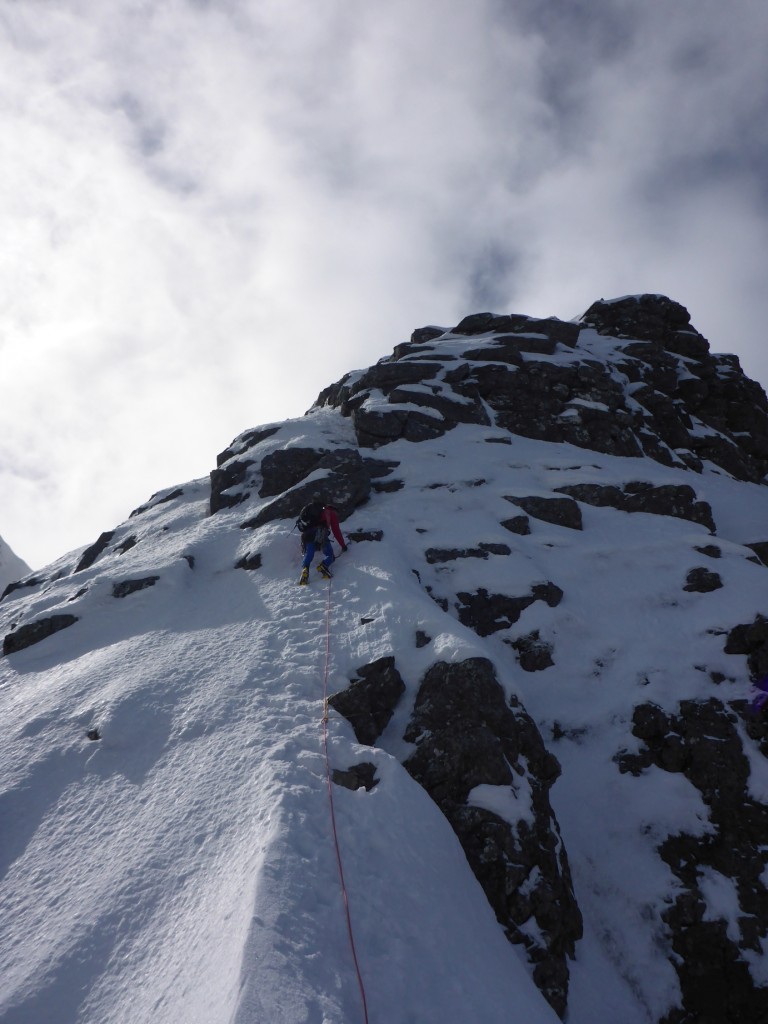 Approaching the Little Tower. After moving together on the easier ground below, we belayed on the rock above where I'm standing, and climbed two enjoyable pitches on mixed ground to the top of the little tower. Approaching the Great Tower. The famous Eastern Traverse crosses the exposed snowy ledge system on the left-hand side of the tower. 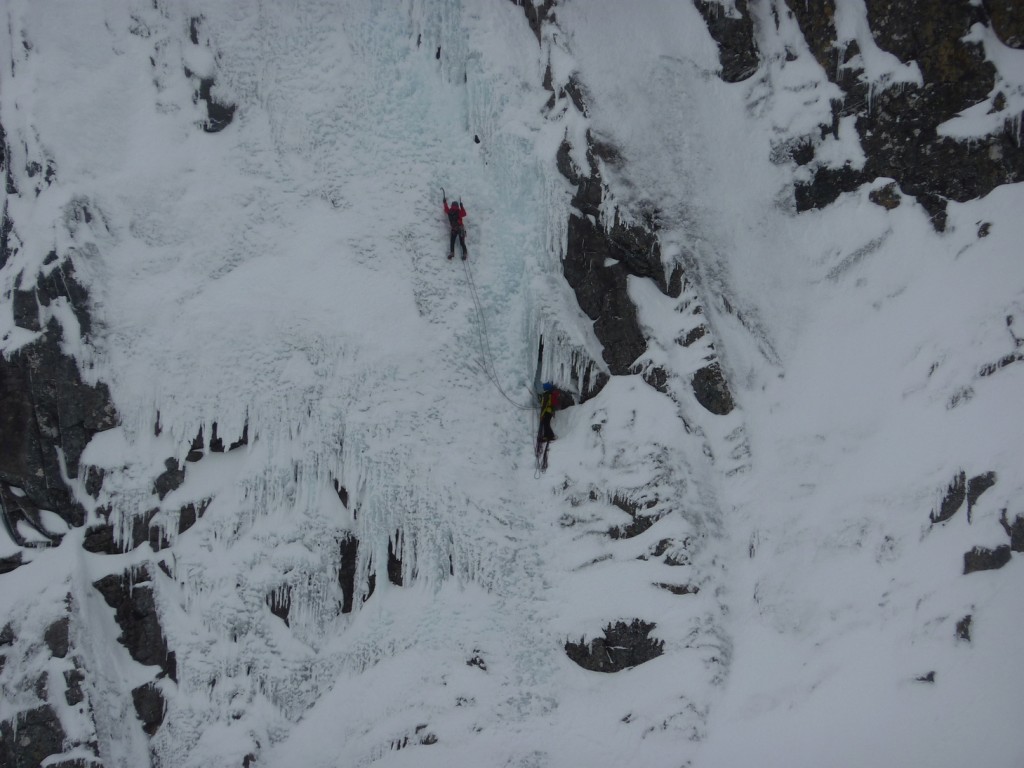 Before setting off on the Eastern Traverse we stopped for a drink and some Haribo, and got some great views of this team on Indicator Wall (another classic route by all accounts, V 4 ***) On the Eastern Traverse 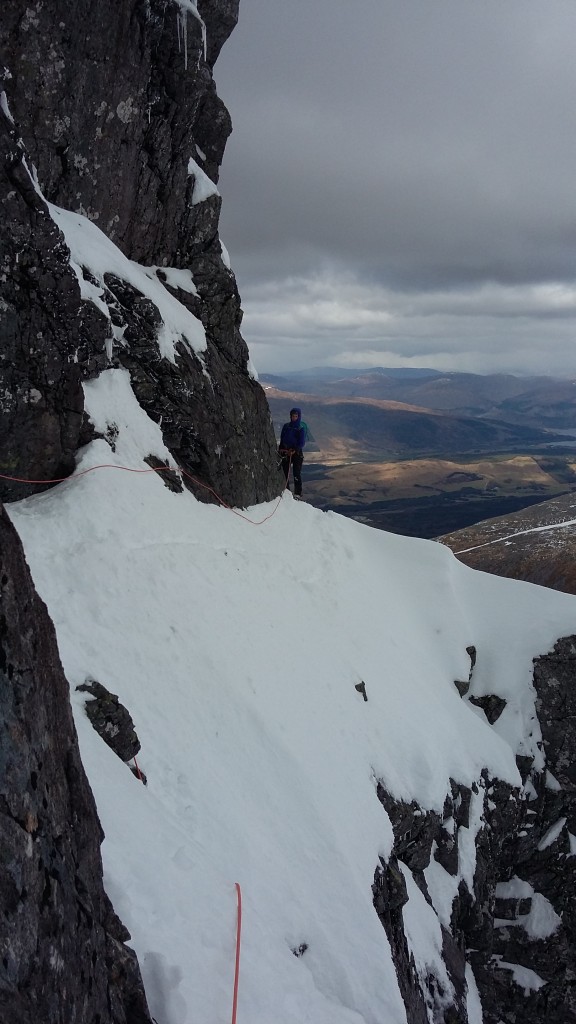 Looking back along the Eastern Traverse to Maria at the belay. The drop below was steep and long... 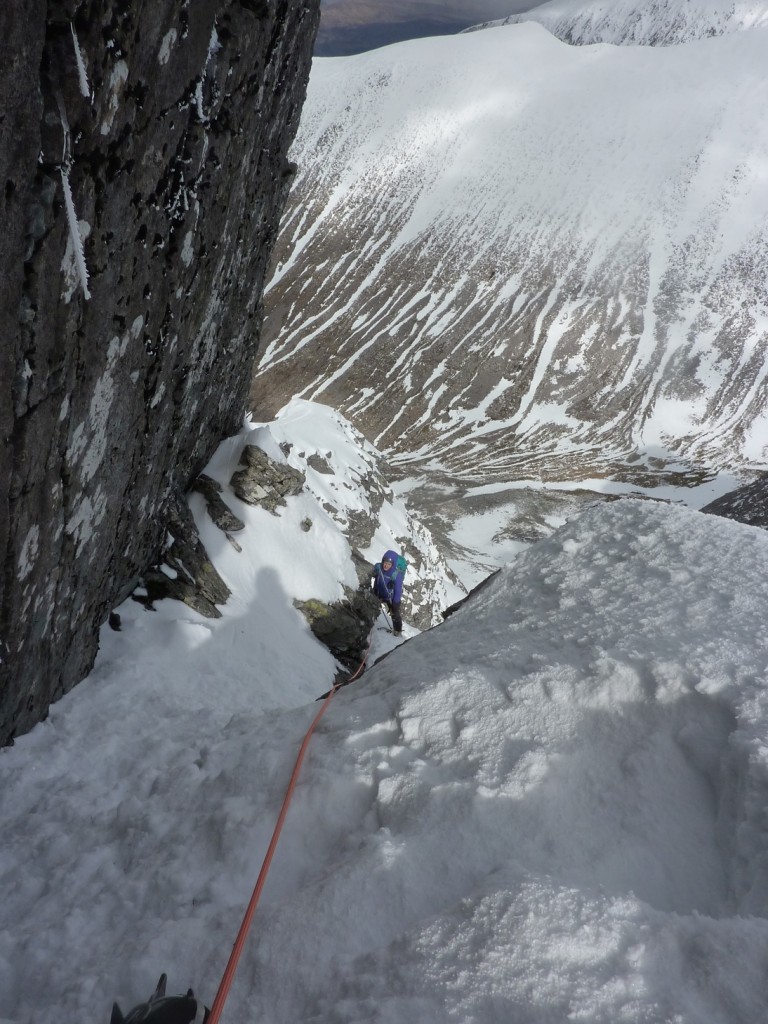 Maria approaching the belay at the end of the Eastern Traverse. After this, we traversed a few more metres before climbing steeply up mixed ground to the top of the Great Tower. 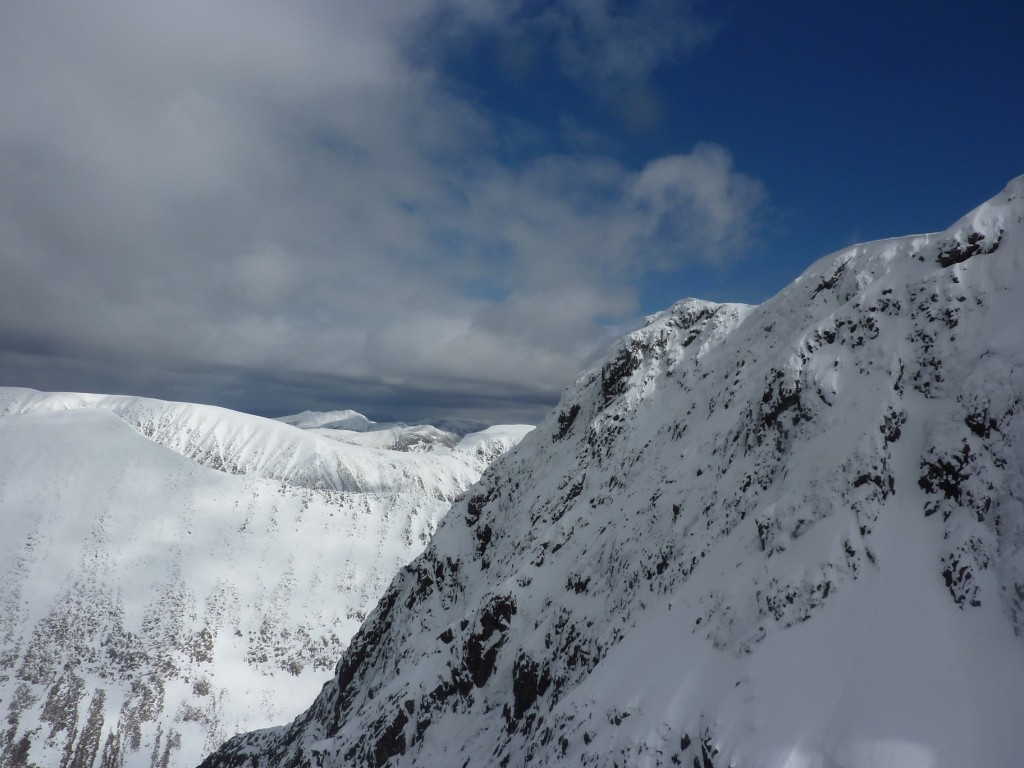 View of NE Buttress and the CMD arete 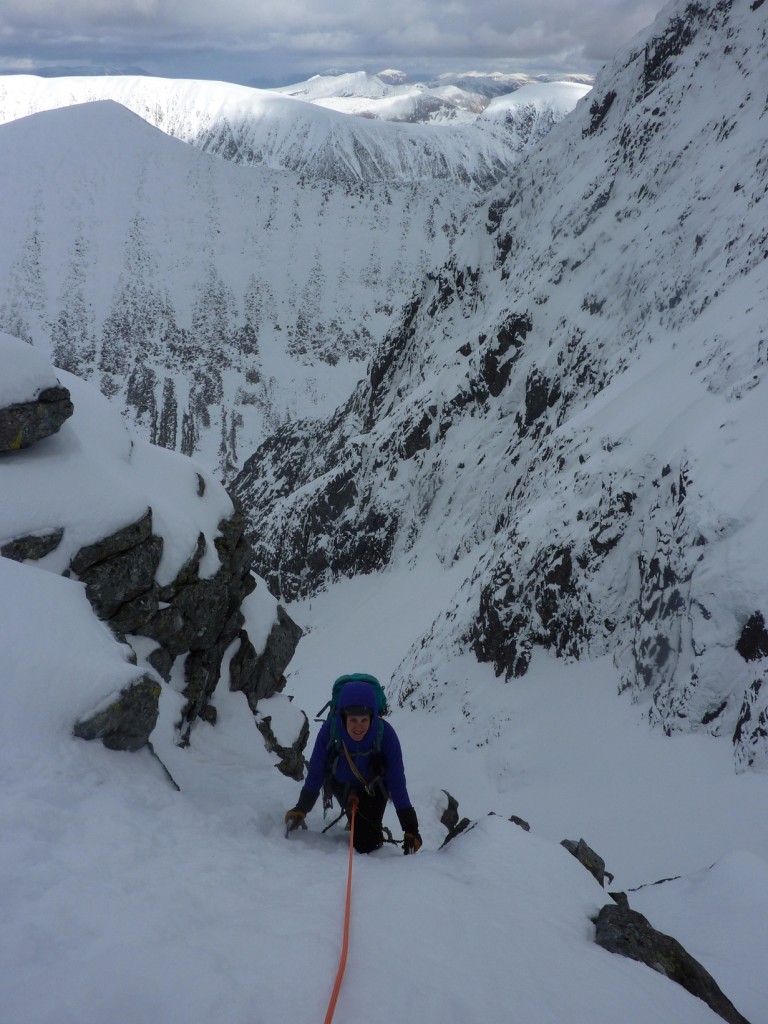 Approaching the top of the Great Tower 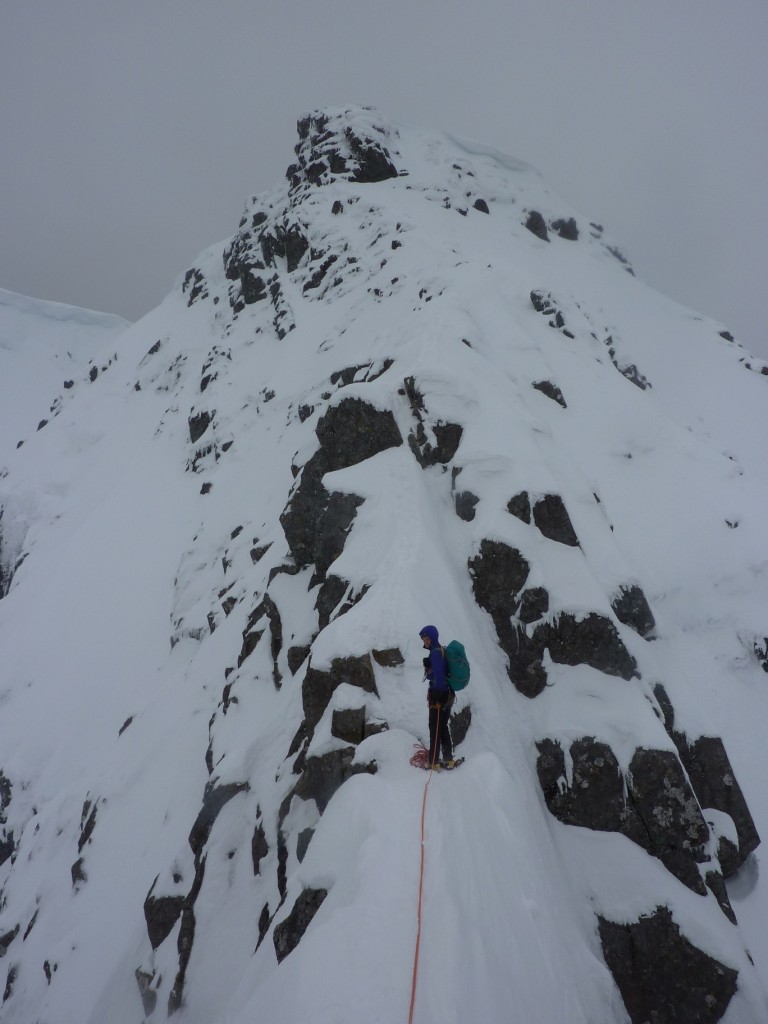 Maria about to set up a belay just before Tower Gap, the last major obstacle on the route 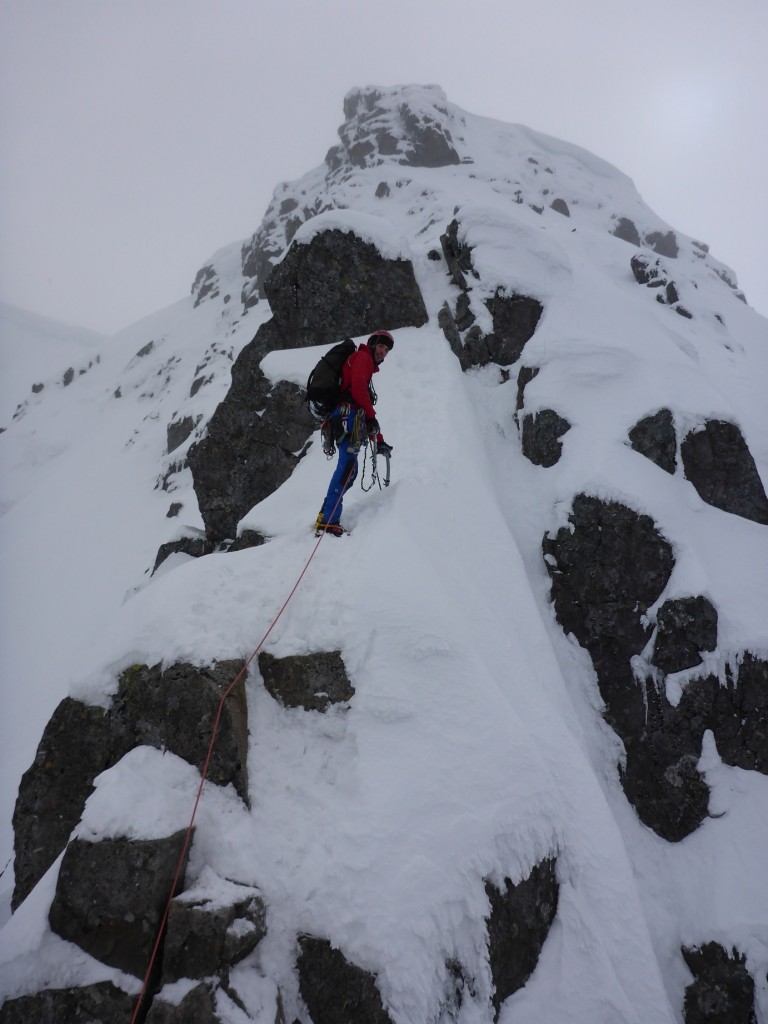 Climbing out the other side of the gap 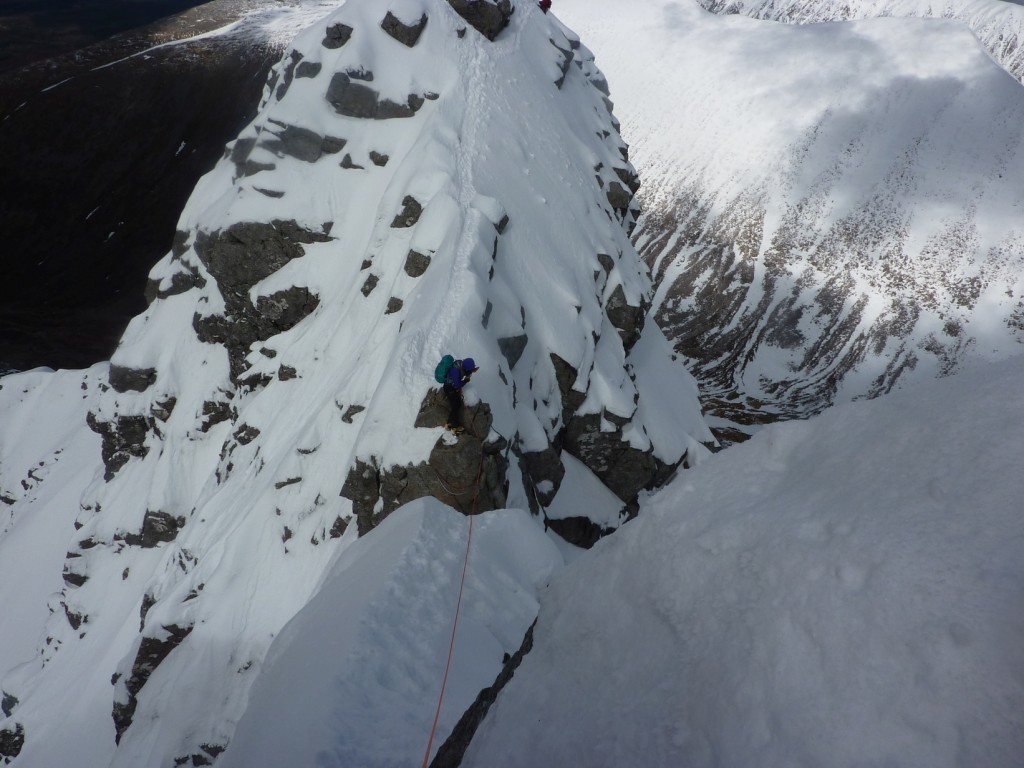 Maria descending into the gap (not hanging on the tat as that would be cheating!) 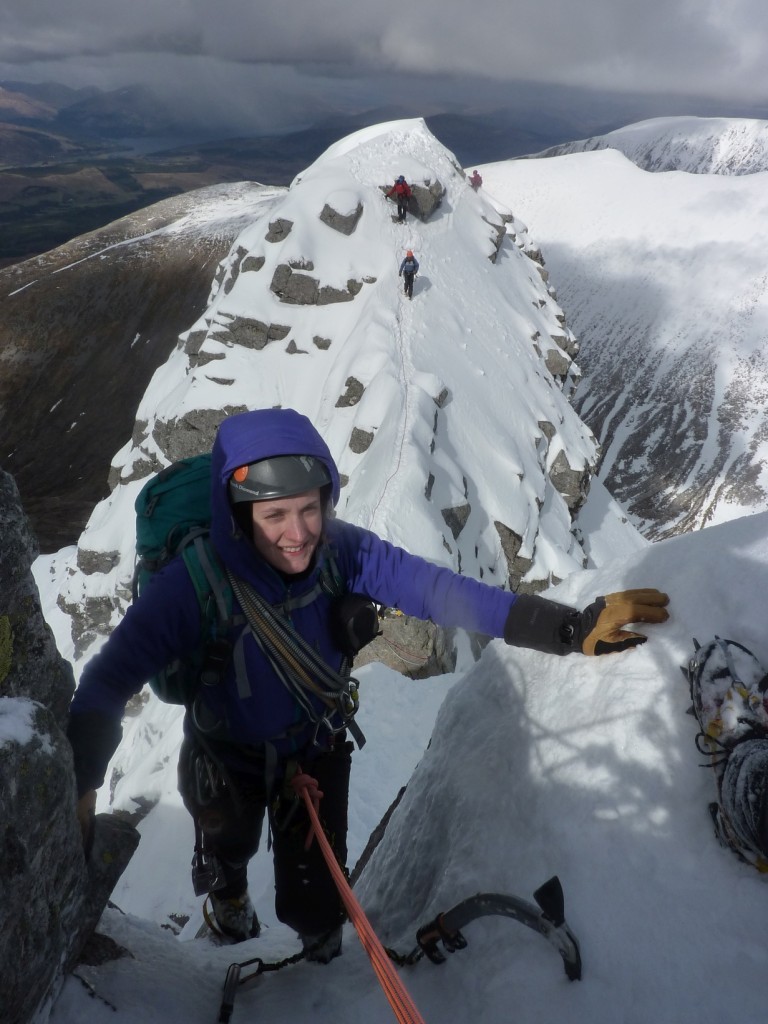 At the belay above Tower Gap 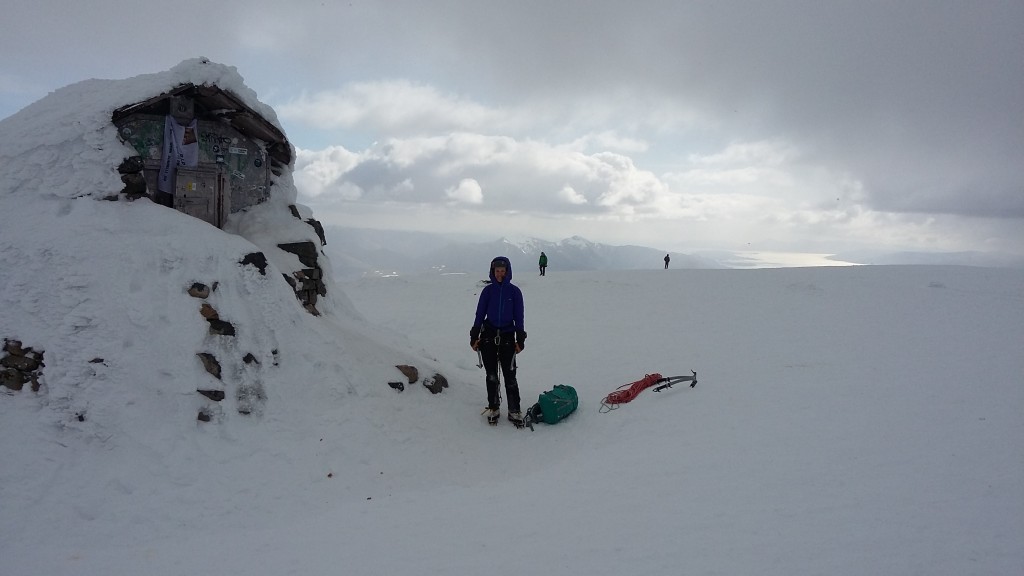 On the summit, enjoying the views and the relaxing sensation of standing on relatively flat ground. As ever with Ben Nevis, soon after reaching the summit plateau we saw a guy wandering around wearing jeans & trainers, and not even carrying a rucksack, so I assume no spare layers, no waterproofs, nothing to eat or drink.... Great views of the Mamores as we set off down from the summit, with the coire on the left of this picture looking ideal for skiing... 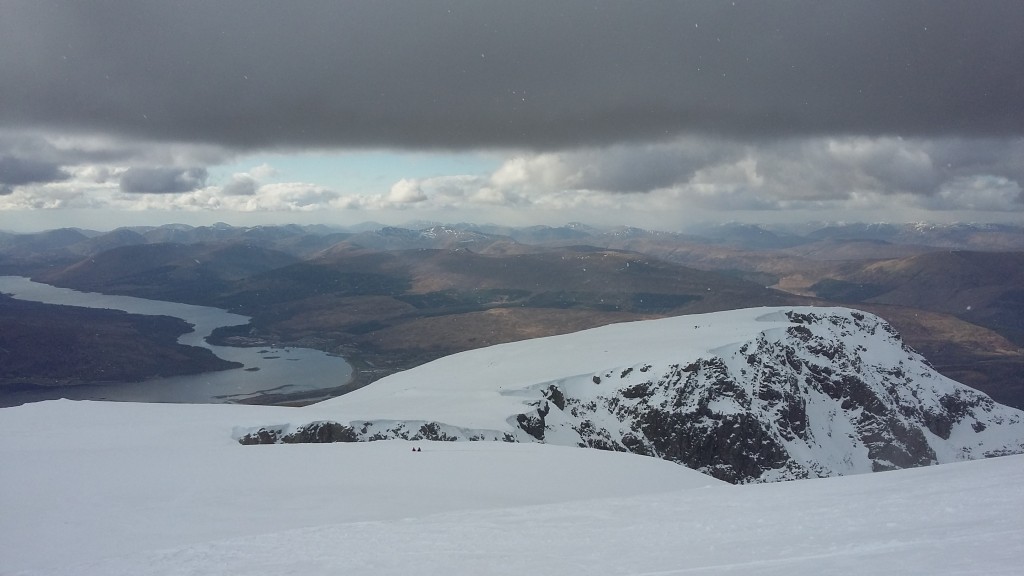 More great views on the way down