Over the weekend of the 6th to 8th of March and despite challenging and unpredictable weather throughout the winter season a team of seven club members headed north to Aviemore where, thankfully, decent winter conditions had established.  Dave M and Steve M arrived a day early to climb on Friday and were joined in the youth hostel that evening by Dave C and Matthew D.  Jen B, Jenny P and Nathan had other accommodation in Aviemore and met up with Dave M and Steve on Saturday morning to start their weekend with an introduction to winter mountaineering.

On Friday the weather conditions around Cairngorm were perfect.  Light winds and sunshine rendering the place hardly recognisable. An easy walk in to Sneachda on a well defined path ensured an early start at the business end of the coire. 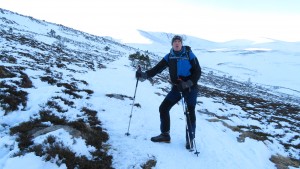 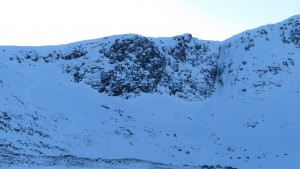 Recent snowfall with prevailing westerly wind limited the suitability of some routes due to spindrift and cornice build up.  The Mess of Pottage provided the best climbing and was popular with a lot of groups.  Starting on 'The Slant'(II) with Steve leading it was decided to break off right to avoid the queue for 'Hidden Chimney'(III) and to climb one of the many variations of 'Jacob's Edge'(II).  A good start to the day and at the summit belay were met by Keith, Steve Green's long-time friend. 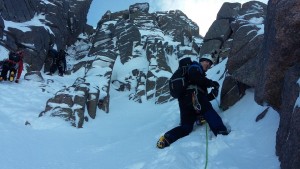 With Keith in company the plan adjusted and a descent back into the coire was followed by solo climbing 'Aladdin's Couloir'(I) which was in very good condition with well consolidated snow.  Descent via point 1141 concluded our day on the hill although in the evening there was time for a beer or two at the Old Bridge Inn with Keith. 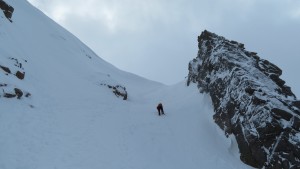 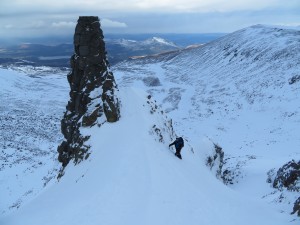 Steve near the top of Aladdin's Couloir

Saturday morning saw a weather forecast set to deteriorate so Matthew and Dave C make a very early, queue beating start for 'The Slant' and 'Hidden Chimney'.  Jen, Jenny and Nathan met at the youth hostel for a kit check before heading up to the coire.  Keith joined the group at the car park where it was decided to head to the base of Fiacaill Ridge where conditions were ideal for practicing ice axe arrest. 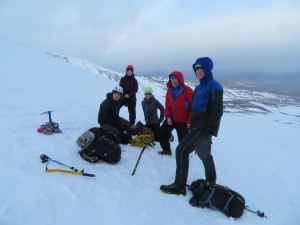 After moving further up the coire crampons were put on to ascend up to the ridge to the right of Fiacaill Buttress.  The wind was now picking up and weather closing in so progress further up the ridge onto the plateau was not possible.  The descent down Fiacaill Ridge provided shelter again and, after saying goodbye to Keith, gave an opportunity to go into the other side of the coire to inspect a small village of snow holes that had been dug by various mountain skills courses.  With the conditions continuing to deteriorate the group called it a day and headed back to the car park.

In Aviemore again there was time for a leisurely debrief in Macdui's where the rugby was on TV and the beer was flowing.  Dave C and Matthew had succeeded in beating the queues at the crag and achieved both their climbs in good weather.  Most of the group later went for a meal at the Italian restaurant.  The buffet was well recommended. 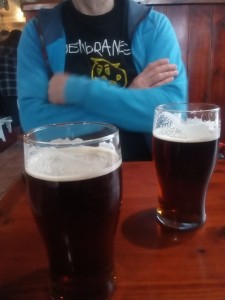 time for a debrief

The weather on Sunday morning was better than expected although quite breezy.  Matthew and Dave C had a slower start and their aim was for 'Ventilator'(III) in Coire an Lochain.  Jen, Jenny, Nathan, Steve and Dave M headed once more into Sneachda where a short spell of rope-work was followed by an ascent to the plateau to the left of Mess of Pottage.  It was nearing lunch time so Jen, Jenny and Nathan had to head downhill and then drive home.  The weather was clear and the route easy to follow so the group of three flew the nest which allowed Steve and Dave M who were staying for an extra day to quickly descend into the coire for another climb. 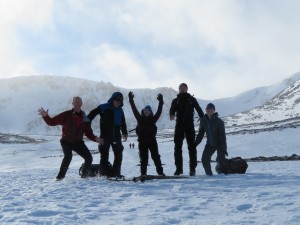 On the way into Coire an T Sneachda 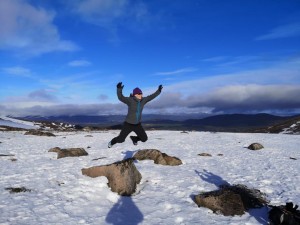 Steve and Dave M descended to climb 'Haston Line'(III) and 'Hidden Chimney' both of which were free of traffic.  Haston Line was a pleasant, straightforward route but with a gnarly, thin crux which challenged Steve to a point where the air turned blue and he didn't know everyone could hear his commentary.  Matthew and Dave C managed to climb 'Ventilator' although there was a lot of sugary snow and thin ice on the route which made for interesting use of technique and route-finding. 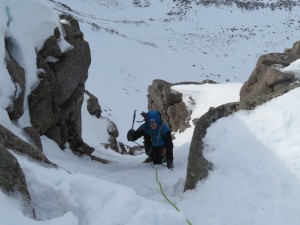 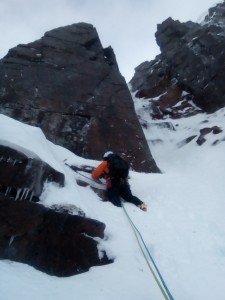 Monday morning was another good forecast with deterioration expected.  Dave M and Steve set off early to climb 'Central Left Hand'(II) before heading for home.  However, a crampon front bail failure when gearing up at the crag effectively cancelled the option to climb.  A battlefield repair with 3mm cord was possible or a solo climb for Dave M but it was decided not to temp fate and withdraw to the coffee shop and then home.  Dave C and Matthew had better luck and climbed 'Fiacaill Couloir'(II) which was now in excellent condition. 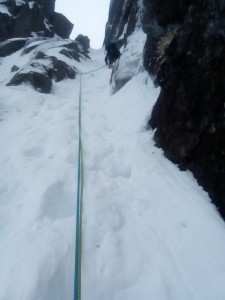 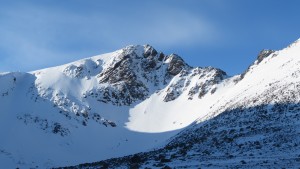 Fiacaill Buttress as seen on Friday 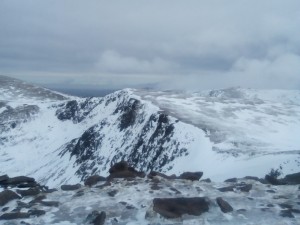 view towards Cairngorm from top of Fiacaill Buttress

Fiacaill Couloir was the final climb of the weekend.  Dave C and Matthew opted not to climb on Tuesday morning as the weather was not playing ball and Matthew's knees and back were now creaking more than the hostel bunk beds.

In summary, the weekend was a great success for everyone involved.  The hostel accommodation proved to be excellent with good value for money (and cancellation policy) and the location in Aviemore and for proximity to Sneachda was ideal.  All participants appear to have achieved their aims of the weekend.  It has been a lean season this year after similar muted conditions over several seasons before, however, goals were set accordingly for the climbers and for the newcomers to winter mountaineering the weekend proved to be a golden opportunity to try out new gear and have a go at winter skills.  Thanks to all who took part, it was a most enjoyable weekend and hopefully an inspiration to go again next year, if not before.