After deciding to give a trip to Scotland a miss over Easter, Dave Carrier and I arranged a day trip to Langdale for Easter Sunday with a view to visiting Gimmer Crag. Figuring there might be a spot of traffic heading that way we left at 5.30 am from York and even managed to find one of those elusive roadside spaces near the Old Dungeon Ghyll to leave the car!

Once above the mist (eventually) our crag came into view: 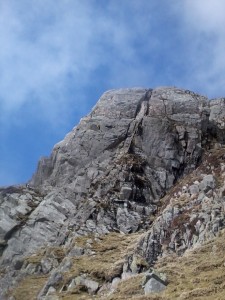 (We actually went up a path to within a couple of hundred feet of the top of Harrison Stickle, and then traversed across and then went down, and then wandered about and then climbed back up, and eventually found our crag - but let's not dwell on that)

First route was the Classic Rock extravaganza that is Bracket & Slab. Dave led the first bit (which looked rather intimidating) , then I led the bracket (awkward and a bit tricky), then Dave led The Neat Bit (a superb and exposed set of moves on some pretty blank walls) I polished off the chimney and the top slab. Bracket & Slab is a top-drawer route and I would recommend it to anyone. An excellent, sustained line with interest the whole way. 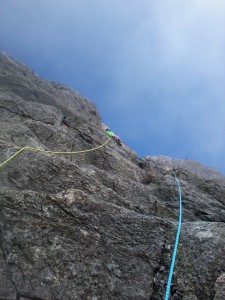 Dave climbing up "The Neat Bit"

A bit sunburnt, tired and dehydrated, we decided of course to do another route. The impeccable Ash Tree Slabs was chosen. Another classic route, with the great bonus that we abseiled off the ledge at the top literally straight down to where we had stashed the gear. (no photographic record of this bit of the day exists unfortunately as I experienced some camera difficulties) On his way down from the abseil point, Dave very kindly traversed a few feet to rescue a wire that another climber had been unable to recover earlier in the day. She very kindly rewarded his gallantry with a drink of water - most kind.

A gently stroll back down to Langdale and we spied a pub... where we queued at the bar. Then the long drive home. All in all though, a classic day's climbing.

Monday morning, and my lie-in was disturbed by a message from Neil Ashcroft suggesting a spot of climbing. I suggested an afternoon at Almscliff - strictly for the purposed of stretching off a few tired limbs - would be a cunning plan. We polished off the easier routes of quality on the Lower Man with ease (Fluted Columns, Fluted Crack, Pinnacle Flake, Stewpot), and I was just about to suggest a drive up the road to the Square and Compass, when Neil gestured towards Square Chimney & Whiskey Crack. Funny how he seemed keen on this route when it was my turn to lead... Anyway we did it, and I didn't leave too much skin or blood behind. 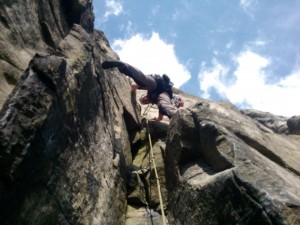 Taking a breather at the top of Square Chimney

Home again and whilst enjoying the last half hour of Spring sunshine sitting in my back yard with a beer, who should call , but Loch. He was keen, it seemed, to go to the Lakes the very next day. He had some vague notion of walking all the way into Napes, and climbing Napes Needle! How could I possibly refuse?

Another fairly early start, a drive to Borrowdale, and the long walk in past Sty Head, and Kern Knotts Crag, and there we were. Napes Needle - the spiritual home of rock climbing (sort of). 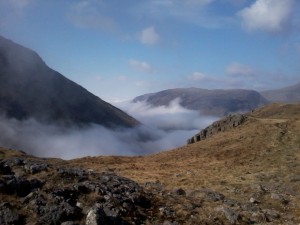 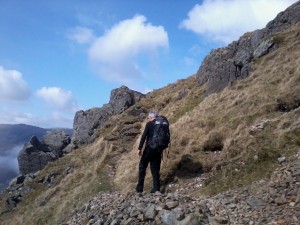 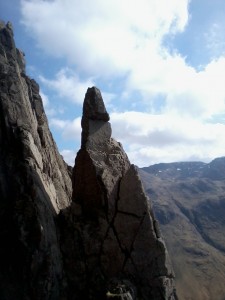 Having done the Wasdale Crack route before, and noting that this side of the Needle still felt rather chilly, I elected to traverse around the base and climb The Arete. This route is rather sparse of gear (to put it mildly) but is nowhere near as polished and slippery as the Wasdale Crack and is a lovely climb up to the shoulder. Loch then followed me up and we arranged the necessary pre-placed cams etc for setting up a solid anchor whilst on the top. I then climbed the last very very polished bit, and there was the top. 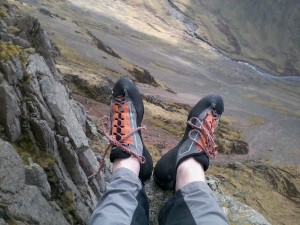 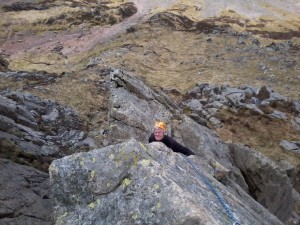 Having dropped a couple of rope loops into the pre-placed cams and under the overhanging bit of the top block, I had a totally solid anchor and belayed Loch from the top.

Loch by this stage was clearly very excited: 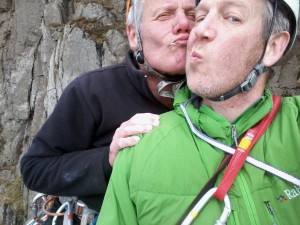 ...but he calmed down enough to down-climb from the top block, and belay me as I lowered myself off. A quick abseil, and we were down! 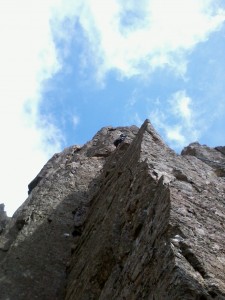 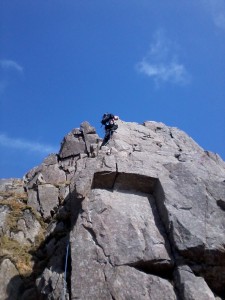 This route rather conveniently conjoins with the upper half of Eagles Nest Ordinary, a huge rambling scrambly Diff, that reaches almost all the way to Westmorland Crag and then ultimately to the top of Great Gable. And then the pleasant stroll back down from Gable to Sty Head Tarn, and back to Borrowdale.

Three brilliant days out. Thanks to Dave, Neil and Loch for being the most excellent climbing partners.

*I have since acquired the 2007 FRCC Gable and Pillar Guide which gives Abbey Buttress a grade of Severe. That would be about right.