Ledge Route (and other meanderings)

Six people getting damp, bracing ourselves for disappointment.

It had taken four and a half hours to get here, driving from Newtonmore, slogging up the Allt a'Mhuillin to the CIC Hut below the cliffs of Ben Nevis, and finally weaving our way up hundreds of feet of scree slopes below Number Five Gulley.

Now we grouped at the entrance to the gulley, waiting in the steady drizzle and wondering just how slippery the rock would be up above.

Mark, Richard Kendrick and Andrew had begun by driving to Inverness on Wednesday night.
Thursday had seen us up Ben Wyvis, on a misty morning which however cleared in the early afternoon just as we were leaving the summit ridge.

I told you it was worth getting up early

We had views out west to see An Teallach about 25 miles away, and began to think we were getting the edge on the weather.

An Teallach across Loch Glascarnoch

Watching the forecast carefully (Mark had a wireless laptop to tune in to the latest MWIS at all times !!) we spent a pleasant evening at Loch Morlich (less informatively renamed Cairngorm Lodge) Youth Hostel with a nice meal (thanks Sarah !!) and waving to the red squirrel who ate just outside the conservatory.

On Friday, we chose Bynack More as a munro furthest from the incoming weather. We were rewarded by a completly clear day on the hill - albeit a bit windy - and only an inconsequential shower in the afternoon. 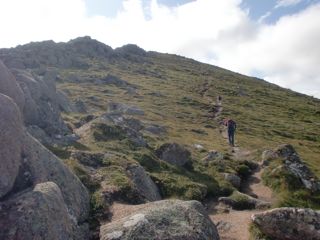 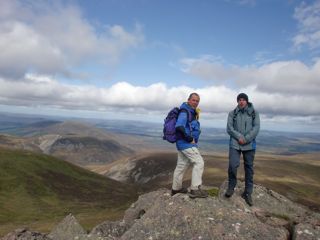 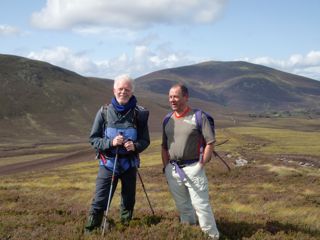 Then it was down to Luibleathann Bothy via a nice bar meal, to light a good fire and let the wine breathe ready for the arrival of Steve Green, Amanda, and Katie. 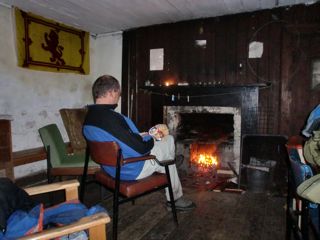 The forecast promised an improving day on Saturday, so we hung on at the bottom of Number Five, standing in the rain, until a hint of blue began to appear round the corner of the huge Carn Dhearg buttress. Finally, "let's just have a look at the first bit......".

It still seemed doubtful as we clambered 50 metres up the gulley, with lots of water cascading down its bed. 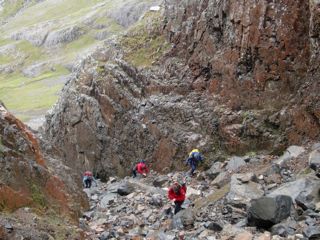 Then Ledge Route breaks out right onto the first of the ledges. The way was soon barred by an 8 metre rock slab. Easy in the dry, no doubt. Running with water, and greasy, the prospect of a slide on rock could be followed by a slide on grass and plenty of air time over the edge of the gulley yawning below. Richard and Andrew carefully made the 3 or 4 moves up the slab, and with the rope dropped down, the rest soon followed. (We also made a check that an abseil point was available, in case it got any worse.......).
Round a corner, a grassy rake took us to the upper ledge without any drama, and then onwards to the rocky rib which connects the buttress back to the main mountain. 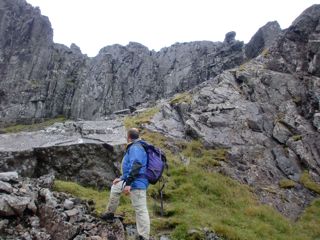 All perfectly straightforward now, good holds, rock drying, cloud lifting off Tower Ridge to our left, and views out and down into Lochaber. 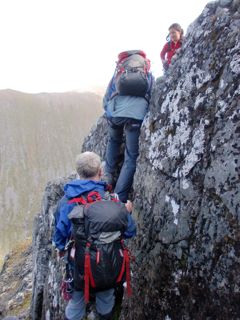 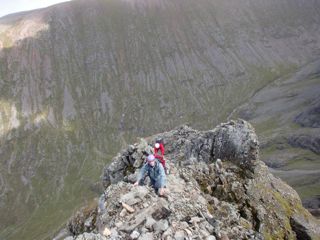 Finally, we topped out on Carn Dearg. The summit was now becoming visible, so we joined the throng on the tourist path, to achieve Katie's very first Munro on The Ben. (and Amanda's first time to actually see much of it !!). 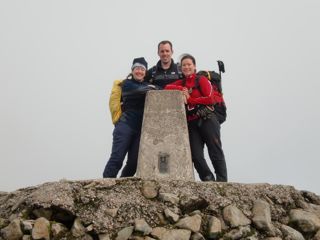 The afternoon was getting clearer, so Steve led us on down the rocky northeastern side and across the famous CMD arete for more easy scrambling. 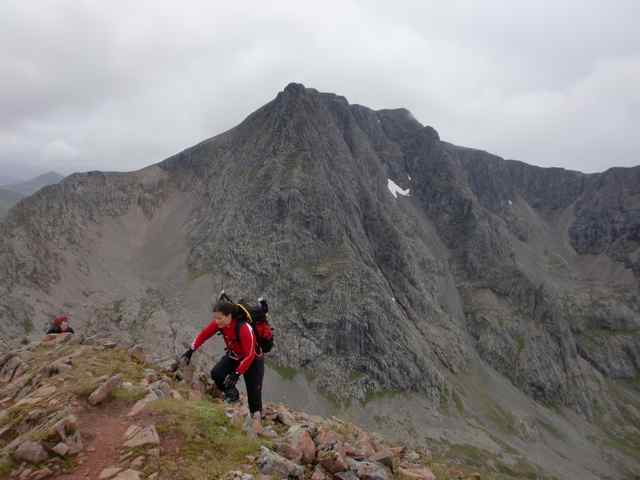 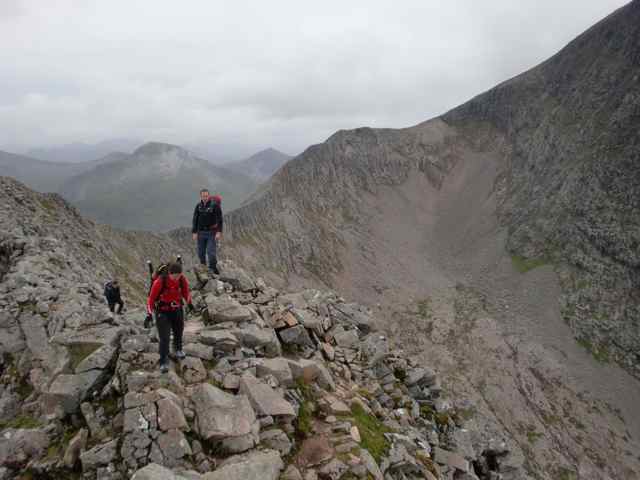 As afternoon wore on into early evening, we crossed Carn More Dhearg and then down down down to the path back to the car park.
A long day of 9 hours walk/scramble and a late pizza back at the Roy Bridge Hostel.

It was just as well we had a magnificent Saturday in the bag, as Sunday was pretty poor everywhere. Mark had blisters from new boots, so went to check out Cafe Mambo in Aviemore, whilst the rest had a Sunday constitutional from the Sugar Bowl car park across to the Chalamain Gap in high winds, plus the wee hills of Creag a' Chalamain to the north. afternoon tea was provided by Steve (and Beverley.....ta very much.....) back at the bothy, before most of the team left for home.

Andrew and Richard spent a final night at the bothy, and then Monday dawned glorious sunny and clear. Some Munros by Drumochter were chosen for a little exercise on the way south......we rather stormed up Geal Charn in just an hour......but with pause for respect however at the brand new cairn erected in memory of Mick Costello "ice climber extraordinaire" 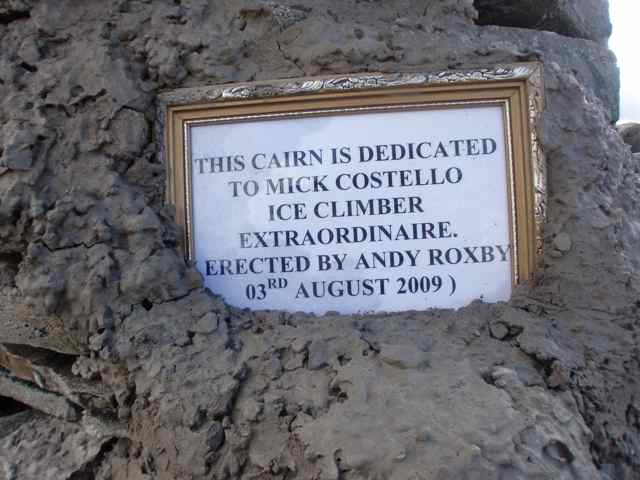 The summits of Geal Charn and A'Mharconnaich gave us excellent views of Culra Bothy, Ben Alder, and the wide landscape all around. 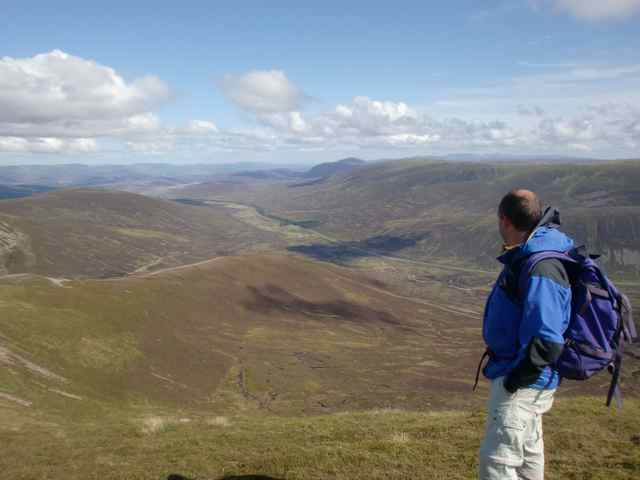 Och, my heart is in the Highlands....(home of the Clan McKendrick ??)