By Mike Alps and other overseas trips

Adventures in the Terskey Ala-Too, Kyrgyzstan

Part 1 - getting there, logistics & acclimatisation

John & Claire took a bit longer to get there than the rest of us… Having set out from York in mid-March, driving their trusty ex Glasgow Police Mercedes Sprinter (now converted into a campervan and named ‘Ivan’), they had spent four months exploring, climbing, mountaineering, drinking wine, and getting stopped by police in a variety of countries on the way to Kyrgyzstan.

Will, Guy, Maria and I took the more conventional route, flying from the UK to Bishkek via Moscow. We all met in the Futuro Hotel, a well-designed little oasis of modernity in an otherwise fairly run-down industrial area of Bishkek. Beers were drunk, pizza was eaten, and we discussed plans for our expedition into the Terskey Ala-Too, a sub-range of the Tien Shan which lies to the south of Lake Issyk-Kul (the 2nd largest mountain lake in the world after Lake Titicaca).

We had arranged to hire a car for the first few days of the trip, and the next day we went to pick it up from the well-named hire car company Iron Horse Nomads (www.ihn.kg). We picked up the Renault Duster, survived the interesting (scary) experience that is driving in Bishkek, bought some supplies (including a large watermelon and some single malt) from a supermarket, and ate some dinner at a local restaurant that some of us came to regret…

We also admired a huge camper-truck that had been driven from Germany and completely outclassed Ivan and the Duster. 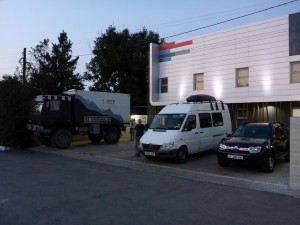 After a 2nd night in the Futuro, we drove off in convoy out of Bishkek and into the countryside, past numerous roadside food stalls (the melon zone, corn on the cob zone, fish zone, etc), along the shores of Issyk-Kul to the village of Tamga, where we would stay while acclimatising. Only about 4 hours drive from Bishkek, Tamga has a brilliant guesthouse and serves as a great base from which to explore the big mountains south of Issyk-Kul.

We had arranged logistical support for the expedition through Kygyzland (www.kyrgyzland.com), which is run by Misha Danichkin, a local mountain guide. His parents and sister run the guesthouse, and they provided a warm welcome, plenty of tasty food (with lashings of dill!), and Cornetto-style ice creams for 20 som (about 22p). 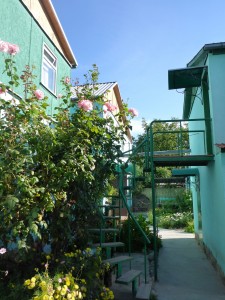 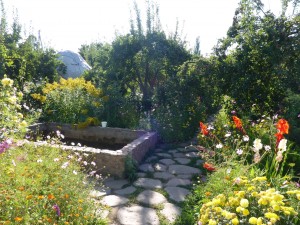 Guy, Will and I popped out to go and fill up the Duster, which proved to be more challenging than expected. We got stopped by the local police shortly before arriving at the petrol station – they had no reason to stop us, and with no shared language we refused to get out of the car, had a bit of a stand-off before they lost interest and we drove off. Interesting. A calculator proved useful in communicating with the woman at the petrol station about how many litres we wanted and how much it would cost.

On the Tuesday of the first week we went into the proper mountains for the first time. Misha introduced us to another Misha (who, being smaller than the first Misha, became known as ‘little Misha’), who would cook for us and generally be a very helpful person to have around at base camp. We drove up the Barskoon Pass with the two Mishas, and went for an acclimatisation walk in an area that Yuri Gagarin used to enjoy spending time in. We walked from around 2300m to a high point of about 2950m, saw some impressive waterfalls, a statue of Yuri Gagarin, and a strange red metal box that was apparently a police station. 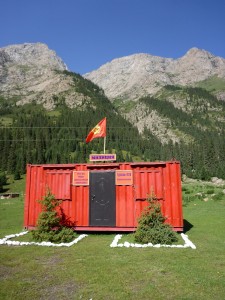 Apparently this red box was a police station... 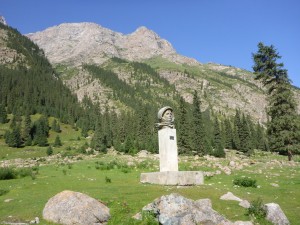 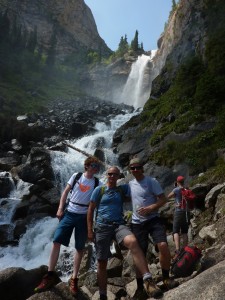 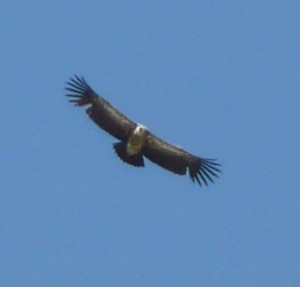 At the side of the road there were also some locals in yurts, who sold Kyrgyz speciality food & drink and rides on horses. Qurut (a kind of salty cheese/curd thing) tasted OK, and Boortsog (fried doughy things) were quite nice, but Kumis (fermented mare’s milk) was definitely an acquired taste (and none of us acquired it). 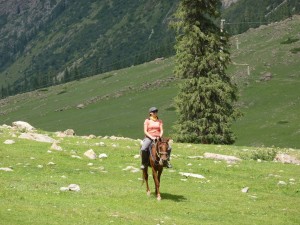 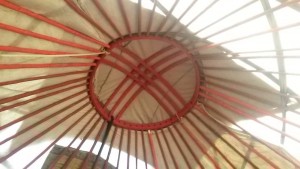 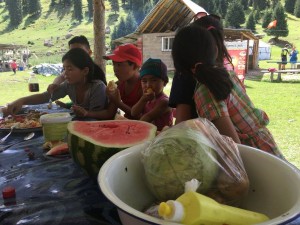 We had two more days of acclimatisation trips, driving up the Barskoon Pass and walking in the hills, reaching a high point of around 4300m. On one of the afternoons we also had a swim in Lake Issyk-Kul, which has the unusual combination of sandy beaches and views of glaciated peaks. 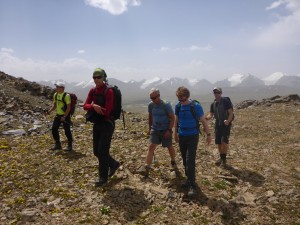 Little Misha, big Misha, John, Will and Guy on an acclimatisation walk 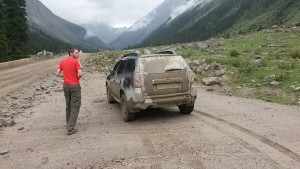 We managed to get our hire car impressively dirty!

On the Friday of our first week it was time to go and set up base camp. We loaded up two big 4x4s with all our kit, and set off up a road/track through the Tosor valley, which steadily became rougher as we gained height over the Tosor Pass (high point around 3900m). By this stage we had also been joined by Sergey, who would be little Misha’s assistant at base camp. 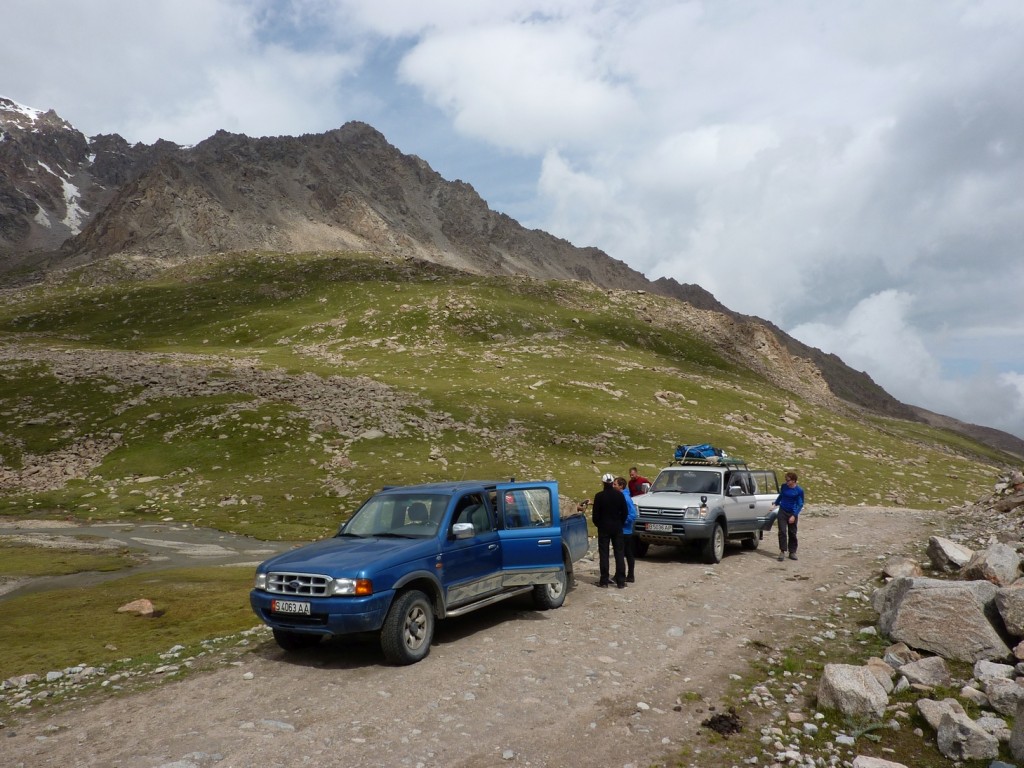 Our 4x4s on the way up the Tosor Pass

A couple of km after crossing the Tosor Pass, we reached a point where the terrain got too tricky for the 4x4s, and were met by Ivan (not John & Claire’s van, but a local with some horses who would transport some of the kit from here). We loaded up as much of the kit as would fit on the horses and our backs, and then set off towards our intended base camp site next to Chunkur-Kel lake, at around 3600m and around 5km away. One of the 4x4s was taken back to civilisation at this point, but big Misha left the other one there, and spent the walk to base camp considering whether he’d be able to get the car all the way.

We arrived at Chunkur-Kel, tired by the load carrying at altitude, but excited by the amazing surroundings we found ourselves in. 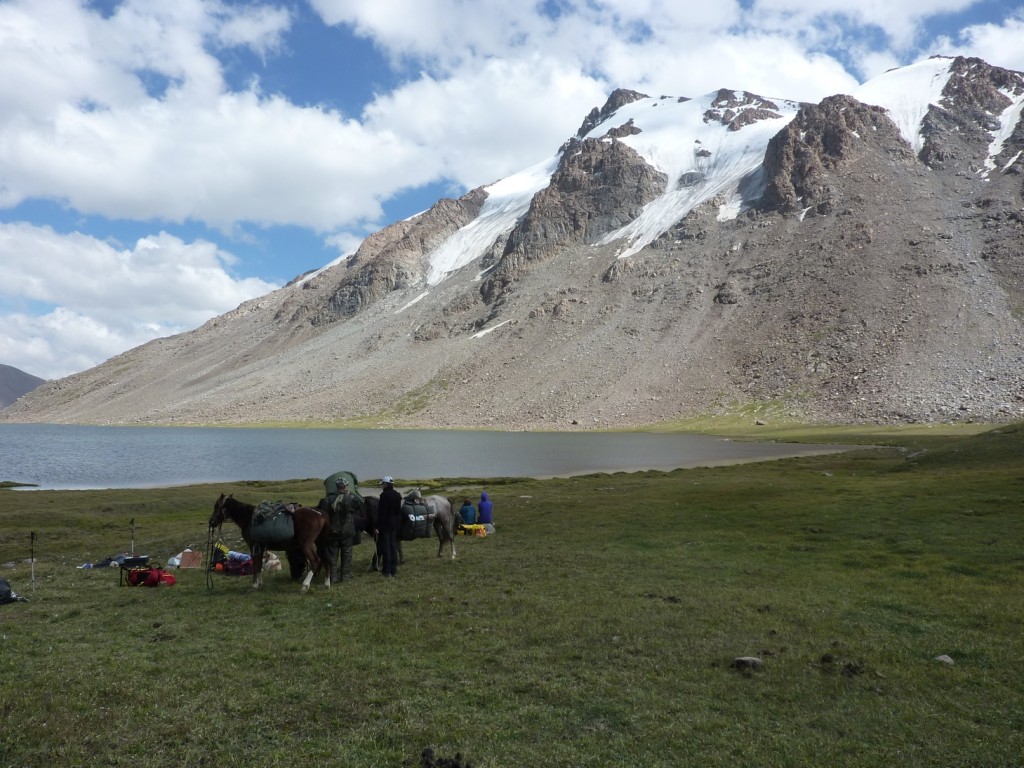 Not a bad place to camp!

Misha decided that it was worth attempting the drive with the remainder of the kit, so while the others stayed to set up camp, Misha, Guy, John and I walked back to the 4x4 to see if we could get it to Chunkur-Kel. We loaded it up, and impressive off-road driving skills from Misha got us to camp with all the kit. 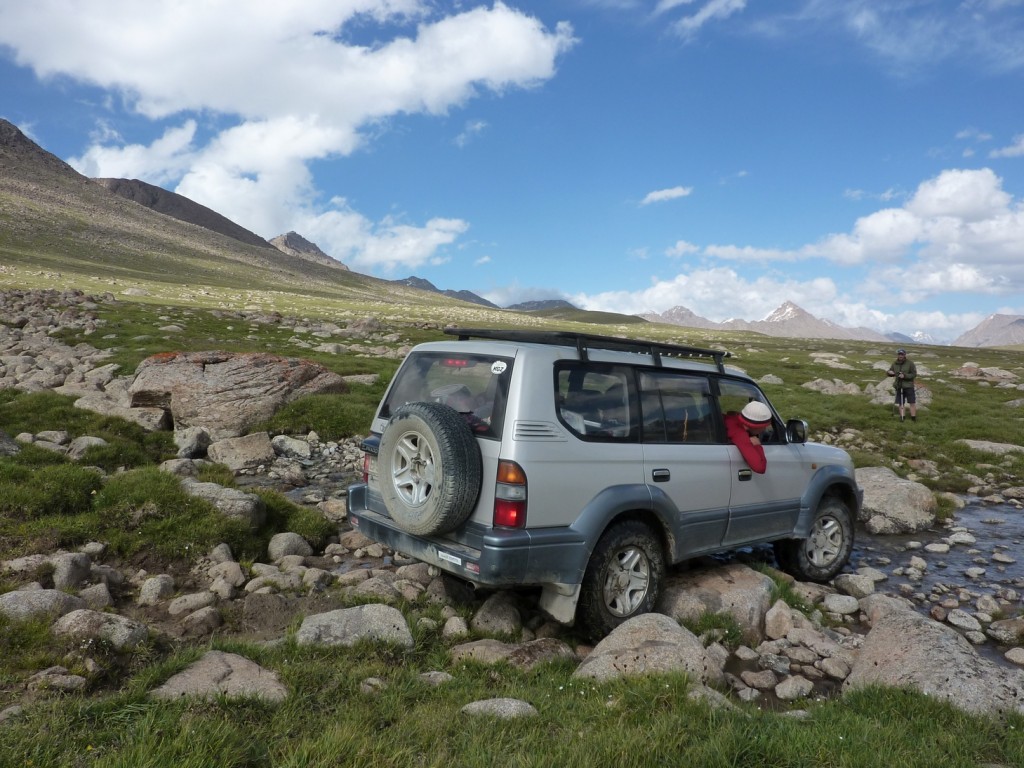 Misha negotiating a rocky river crossing in the Landcruiser