Many thanks to John and Penny for organising what turned out to be a cracking day out in the Peak District.  The weather was warm and dry for the duration after the small amount of rain as we arrived.

The crag was a short walk from the car park.  We started off at Stokers Wall. Alabama and Anna were shopping for new gear whilst John lead a couple of routes and belayed everyone else from the top.  John gave Rowan and Bella an introduction to the different types of protection used for trad climbing and demonstrated how to build a stance on top.

Alabama arrived with his fancy new green helmet and took Anna off to “do Roger the Cabin Boy.” 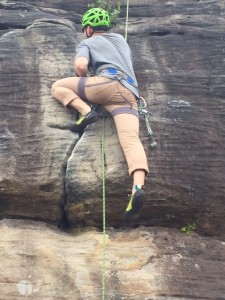 We then moved over to Nelson’s Slab (soon realising the nautical theme) and did a tricky climb requiring delicate footwork before heading to the Sail Buttress and climbing Top Sail.  There was a nasty surprise waiting for us on top: bird crap. Other than that, it was a good climb albeit reachy. 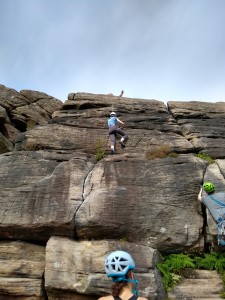 Some of us went up Camperdown Crawl on the Trafalgar Wall which was pretty tough towards the start, bravely led by John.  Alabama and John then climbed Barnacle Bulge (Alabama leading.)

It was then beer-o-clock.  Alabama and Anna did some more climbing before meeting everyone at the Robin Hood Inn for a drink with talk of Rod Stewart, cracks and other climbing related humour….