For this year's return to the Ecrins to "Find our Frenchies", Antoine (our most active international member) and I decided to start with some big alpine rock. On Saturday morning  20 July, we set off from Les Etages toward the Sorreiler Hut (with non-member Nicolas Coronnel) and saw the beautiful Aiguille Dibona as we hiked up. We did two 3-pitch sport routes that day to the left of the main needle called "ET" and "Blanche Neige" - both were great. 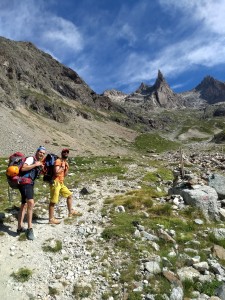 Hiking up the 1200m from Les Etages to the Aiguille Dibona

The next day we decided to tackle the main needle and did the Voie Madier, which is a 14 pitch piton-littered mega route. It's highly recommended to anyone and the French 6b crux 'Madier crack' is easily avoidable, but why avoid it when you've been honing those crack skills at Almscliff and Brimham all Summer (we definitely did it!). 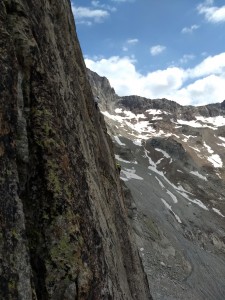 Spanish friends on the (easier) route to our right 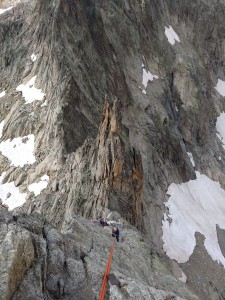 The next stop was Villar D'Arene near La Grave, where we linked up with Antoine's sister and boyfriend and hiked out to the Refuge du Pave on the Southeast side of La Meije. We went up Pic Gaspard (3883m) via a lesser known route called the Voie Piaget on the West Face. The hut guardienne and Antoine had been reccy'ing this route for a while trying to see if it was still viable since several previous attempts have required helicopter rescue. We set off and had a good first half of the day, but there is a good chance that the original route has slid off the mountain, so we traversed the face several times to find safe ground and finished by forging some new routes and linking with the Stofer route. 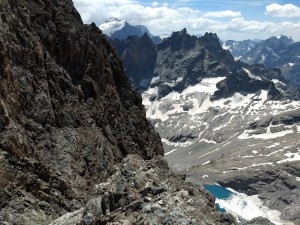 On the Voie Piaget (ish) on Pic Gaspard

We finally reached the Summit around 4pm and commenced the 5 hour abseil and walk over the glacier to get back to the refuge. Antoine has made a really nice write up of this little epic on camptocamp here. 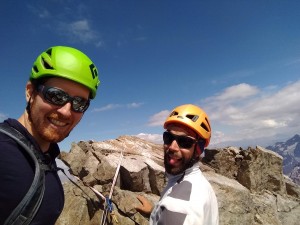 The next day, we took a rest day and went up from the Pave hut to Pic Nord du Caval and did a 6-pitch trad route called Voie Genepi. This was some very welcome clean rock, and you could easily spend 3 days climbing on this crag and the smaller Point Emma nearby. 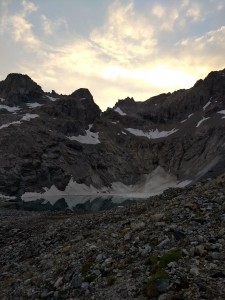 Sunset at the glacial lake at Refuge du Pave

Heading back down the valley for a rest day, we then moved on to the north side of the valley for the Refuge du Goleon. We set off on Friday morning for the Aiguille Meridionale d'Arves (3514m) and knocked it off and made it back in time for lunch this time. 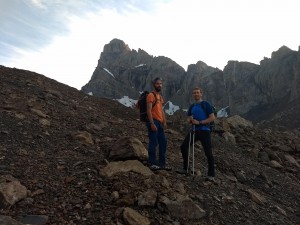 Antoine and Andrew with the Aiguille Meridionale D'Arves in the background

The French 5c crux was over-protected with many bolts, so we were able to do it in mountaineering boots. This is a great intermediate mountaineering objective and a step up from the F-rated Aiguille Goleon. The camptocamp is here. As always, the hostesses of the Refuge du Goleon (ex club member Lucile Boust and her friend Myrtille!) are very hospitable and would love to host any YMC members. I guarantee that they will make you feel at home and feed you well. 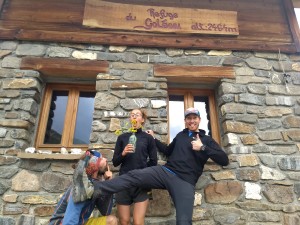 Of course we found time to be silly too.